Album Review: Songs For Pierre Chuvin by the Mountain Goats 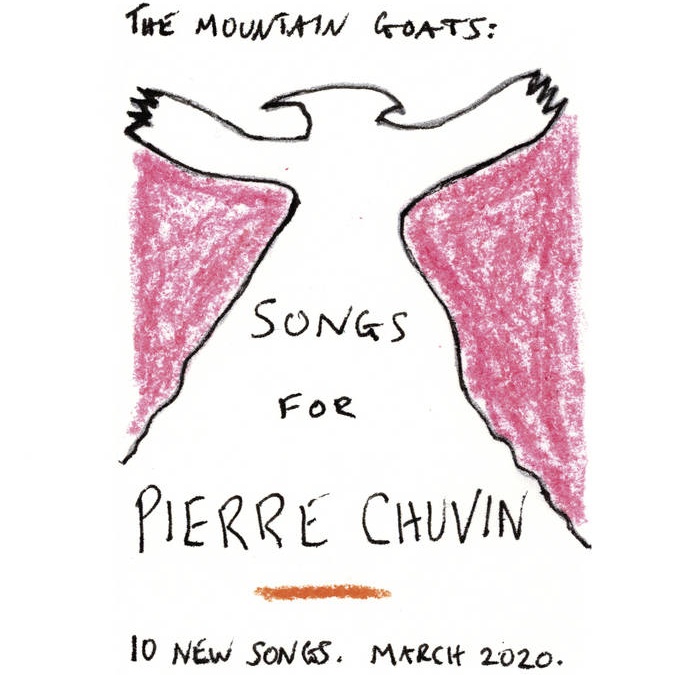 There is cause for celebration. We were called foolish for even hoping but the faithful few have been rewarded. the Mountain goats have just dropped their first release recorded on a Panasonic RX-FT500 Boombox in 18 years. Better yet, this tape is very very good. Before I talk about why though, I must give you some background on the schism.

John Darnielle has been releasing music under the name, “the Mountain Goats” for 29 years now. During that time, he’s refused to stay in one place. What started as boombox recordings of songs, captured minutes after they’d been written, grew into the much better-written songs realized with rich bi-fi instrumentation of the Full Force Galesburg and Coroner’s Gambit era. When his faithful boombox developed a flaw that made recordings unlistenable,* he left bi-fi behind and soon fell in love with what he could create with more collaborators in full studio. What would follow would be a series of incredible albums that brought in more listeners than ever. To some of the hardcore fans though, this was a betrayal of what made them fall for the band in the first place. The songwriting was still there but it was different. The timeless, ancient, intimate nature of listening to the Mountain Goats fundamentally changed. There was a denominational split among the followers. Since the band has only changed more with every year, the gap between the hardcore and newer fans grew.

In many ways, I stand in both camps. If you ask me to rattle off my favorite releases you’d get a pretty even mix of the different eras but if I had to choose a camp I’m definitely with the hardcores. A well produced Mountain Goats record like Beat The Champ could go toe to toe with any traditional album but there’s no other artist in the world that can create something that sounds like those late-era 96′-02′ Mountain Goats releases. To top it off, basically nothing they have released since 2015 has done much for me. Now that he’s found a way to make the old machine work and put out the first collection of first draft boombox tunes in decades, there’s a lot riding on it. How much of what people love about the old stuff is nostalgia? How much was it just the fact that, as somebody in my mid-twenties, I mostly relate to stuff written by somebody in his mid-twenties? How would this tape, written and recorded in 2020, do?

It’s fantastic. I don’t even know where to begin. First, the themes. Religion has always been a central topic for Darnielle’s songs but this collection, detailing the fall of paganism under the unstoppable tide of Christianity, is especially suited to his style. It gives him the chance to combine earnest statements of faith with the bitter songs of survival he’s best known for. Last Gasp at Calama is a standout that features a pagan who is being persecuted for singing to ancient gods spitting bible verses at her executioners.

“Out in the street

Songs of the Great God

Wild on my tongue

Let he who’s without sin

Let anyone else throw the second

As long as it connects with your head

One more summer, then all this is gone

One More then no more swan”

Other highlights include the unwavering conviction of those who hide their practice for survival in the stirring Until Olimpius Returns and the pleading prayers of Their Gods do Not Have Surgeons.^ The other main lyrical focus of this album is reflection. John Darnielle has gone on record saying he finds nostalgia toxic and chooses to always look forward. This is part of the reason his band has remained relevant for decades and why this old school release is so surprising.  It seems that he has become less militant in this stance. While the early days of the Mountain Goats are not touched on for most of this release, the final two songs on the tape make explicit references to the discography.

The existence of Going to Lebanon 2 is honestly a miracle. John is no stranger to writing sequels to songs in recent years but those are usually second attempts at unreleased songs he did not see fit to release (Going Invisible 2, Heel Turn 2, High Doses 2, etc.)  Of the few times, he has revisited old characters, none of them have bridged a gap half as far as the one between 1994’s Zopilote Machine and 2020’s Songs for Pierre Chuvin. Of them all, this is the most written like an old school tMG song. It’s delightfully aloof and twists the chorus of one of his few genuine into something bitter and sarcastic. I just love it.

The closer, Exotic Chains is a funny one to talk about. I really wish he hadn’t published a phone camera recording of it early. I really wish the first time I heard it I didn’t already know he was going to reference his old material. If after listening to 9 songs that sound like something I thought we’d never hear again had unceremoniously transitioned into this song it would have bodied me. The tender plucking and whispering voice walk us through various scenes of old Mountain Goats Songs including, to my ears, Wild Sage, This Year, The Alphonse Mambo and Rain in Soho. Catching these without anticipation would have hit me pretty hard. Sadly, I went in knowing they would be there and spent the four minutes of the song trying to catch references. Lines that could have told a story on their own felt like bookmarks to better songs. That has nothing to do with the song and everything to do with the way I was introduced to it. Luckily, it closes with lines that Broke Me.

“Change will come. Stay warm inside the ripple of the Panasonic hum.
It grinds and it roars.
Headed somewhere better if I have to crawl out on all fours.”

This line is for the hardcore. If you haven’t sat in your room for hours listening to songs like Ontario or Absolute Lithops Effect, clutching to the small things that made waking up the next day bearable, it’s not going to hit the same way. As a person who did for years, I can’t even describe it. These sounds have tattooed their waveforms into my veins and those simple lines brought me back to where I used to be when I first found them. They reminded me how hopeless things seemed at the time and how we will make it through these trials too. We just need to hold on to the things that matter tight enough. After enough relistens, I’ve been able to enjoy this song on its own terms without referencing hunting. It gives me chills.

From a song-crafting perspective, this release is solid. Every single song has at least a couple of stand-out lines. They are connected without seeming repetitive. The songs on this tape are more cohesive and substantial than anything this band has released since Beat The Champ. I think part of that comes down to focus. When he’s making music with the band he spends more effort on the music and knows he can rely on his comrades to punch up the jams. They do create rockin’ tunes together but the difference in priority is tangible and if I had to pick between them, I’d take Pierre Chuvin any day.

Let’s talk about how it sounds. For one, he’s actually singing in a way that makes sense for his voice. A friend of mine once said that, while John Darnielle is a good songwriter, the stat he really has maxed out is delivery. He’s absolutely right. The way he phrases his lyrics and the actor-like performance he plays his songs with really add a lot and it’s part of the reason so many covers of his songs feel empty. You gotta really sync into that emotional groove and feel it.  I say that because the last few records he’s been toning it down. On Goths and In League With Dragons Darnielle pushed his voice places it hadn’t gone before trying to extend his range and, I regret to say, I don’t think it worked. To me, it sounded strained and I finally got what my friends meant when they told me they hated his voice. Even worse, the producer of In League With Dragons explicitly told him to tone down the theatrics and just sing the words. John Darnielle mentioned this when talking about Possum by Night which was the only song where he was allowed to emote and one of the few songs on the LP I really liked.

Flashing to the latest release, this is up there with Beat The Champ as one of his best vocal performances. He’s gained a lot of skill and control since the last time he used the boombox and not only has he returned to the performative singing that suits him better, but the distortion of the cassette recorder smooths out any vocal issues he’d have. That Panasonic really is a marvel. I used to wonder if I was just being pretentious but now I’m certain.

The Panasonic RX-FT500 boombox, released in 1988, is the only way to record guitar and vocals. It makes every strike of the guitar sound thunderous and distorts it differently depending on how loud you are acting as an analog guitar pedal. If you don’t put it too close to the guitar, vocals pierce through the tape distorted just enough to hide weaknesses but clear enough to catch every single word. The soundscape of the grinding gears and background hiss provide a perfect backdrop for musical storytelling. My only nitpick is I think whoever mastered this cut out some of the Panasonic grinding with a noise filter. I could be wrong but it feels like something is missing. Listen to Minnesota and then a song from this tape to hear what I’m talking about.

All in all though, this is exactly what we need during this pandemic. I love the band’s fuller sound but this tape reminds me why I love this band in the first place. I look forward to seeing their next full album but I can only pray that there will be more cassettes recorded in the future. I cannot recommend it enough. I refuse to give this thing a numbered rating and, instead, will show my tier list of every Mountain Goats release I could think of.

You can download Songs for Pierre Chuvan at this Bandcamp link. It’s $10 and all the proceeds will be divided between the band members who lost their main source of income when COVID-19 made touring impossible. They released three physical printings of the cassette printings but all of them sold out in twenty minutes or less.

All Hail The Mysterious Gap!

*I have tried to record with a Panasonic that was broken in the same way. It didn’t sound good.

^What a kick ass title