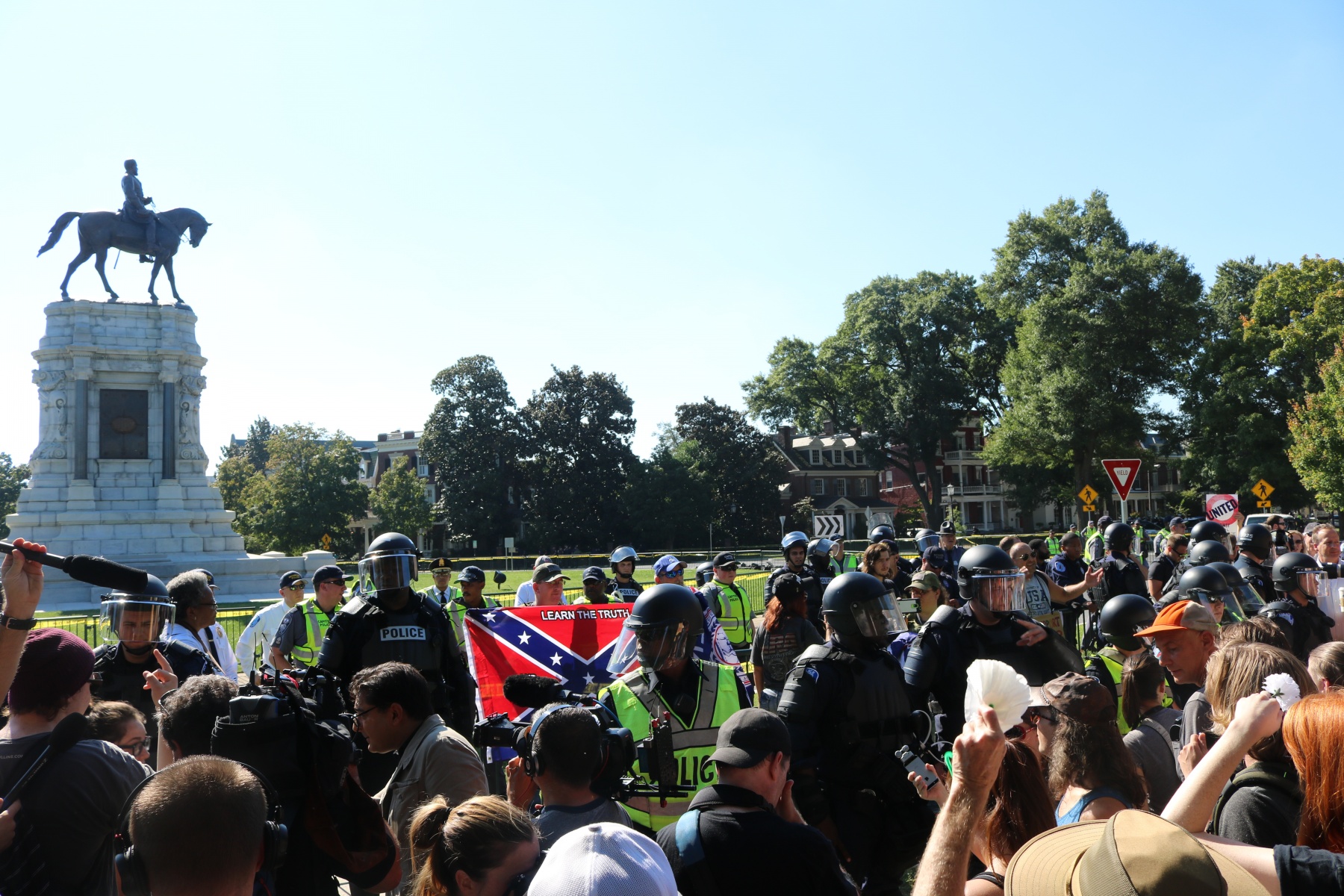 Titled like a bad straight to video sequel no one asked for, CSA II: The New Confederate States of America descended upon Richmond for a “Heritage Not Hate” rally.

The group, best known for selling neo-Confederate merchandise on the internet, did not bring numbers. By 10 a.m. the less than 10 neo-Confederates were handily outnumbered by a few hundred counter-protesters representing a swath of beliefs and groups.

A march for love and not hate was organized by the Richmond Peace Education Centre, and hundreds of people gathered at the Maggie L. Walker memorial to listen to various speakers before heading down to the Lee monument. 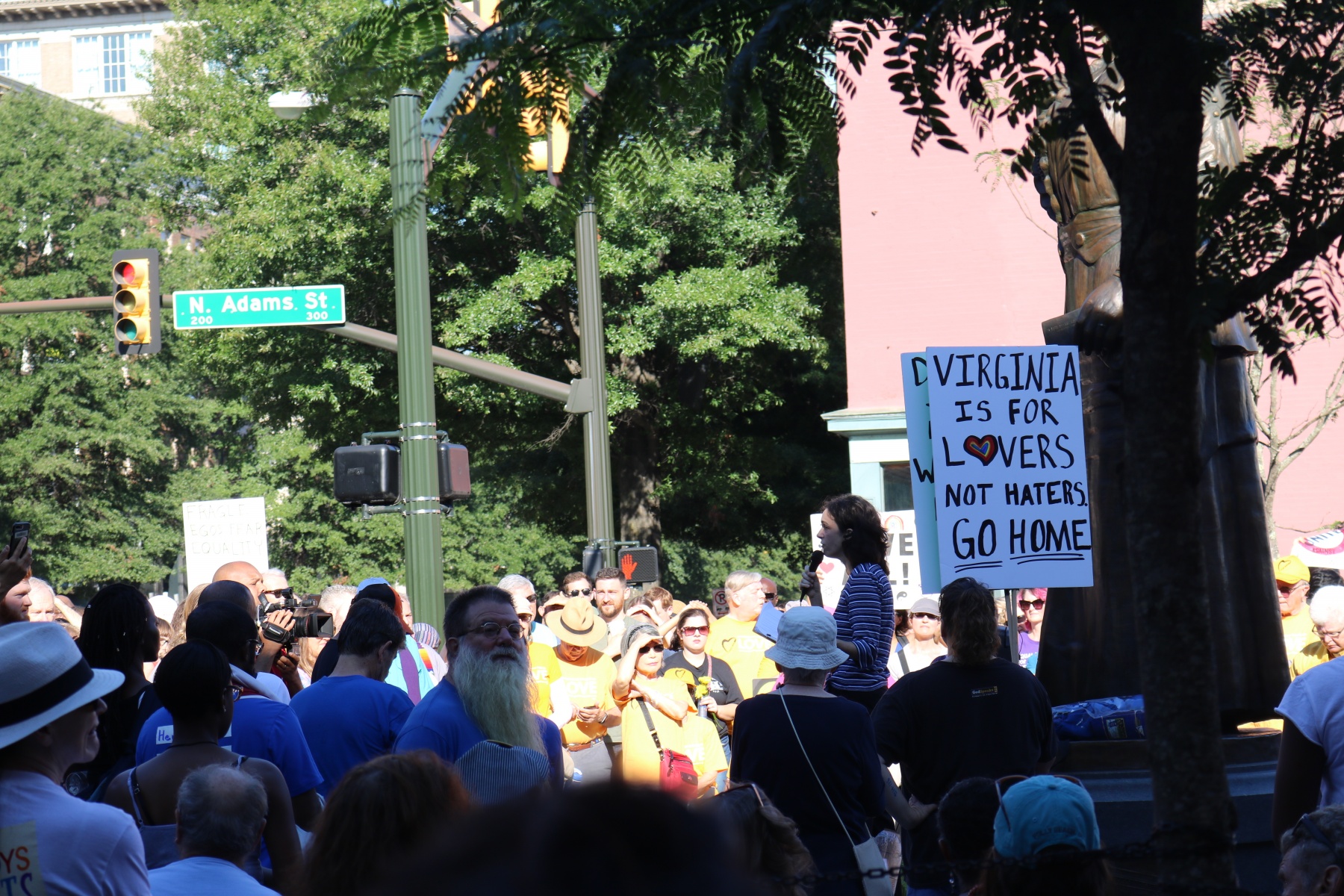 Among the counter-protesters were members of the First Unitarian Universalist Church who felt more inspired to march after the events in Charlottesville.

“White silence is enabling. By being here we’re hoping to effect a change,” said on the church members. “Charlottesville did the opposite of deterring us, it made us more conscious.”

After walking to the Lee monument and encountering the few members of CSA II around 10:30 the crowd of counter-protesters grew. Cries of “Heritage not hate,” were drowned out by counter cries telling the flaggers to get a better hobby. 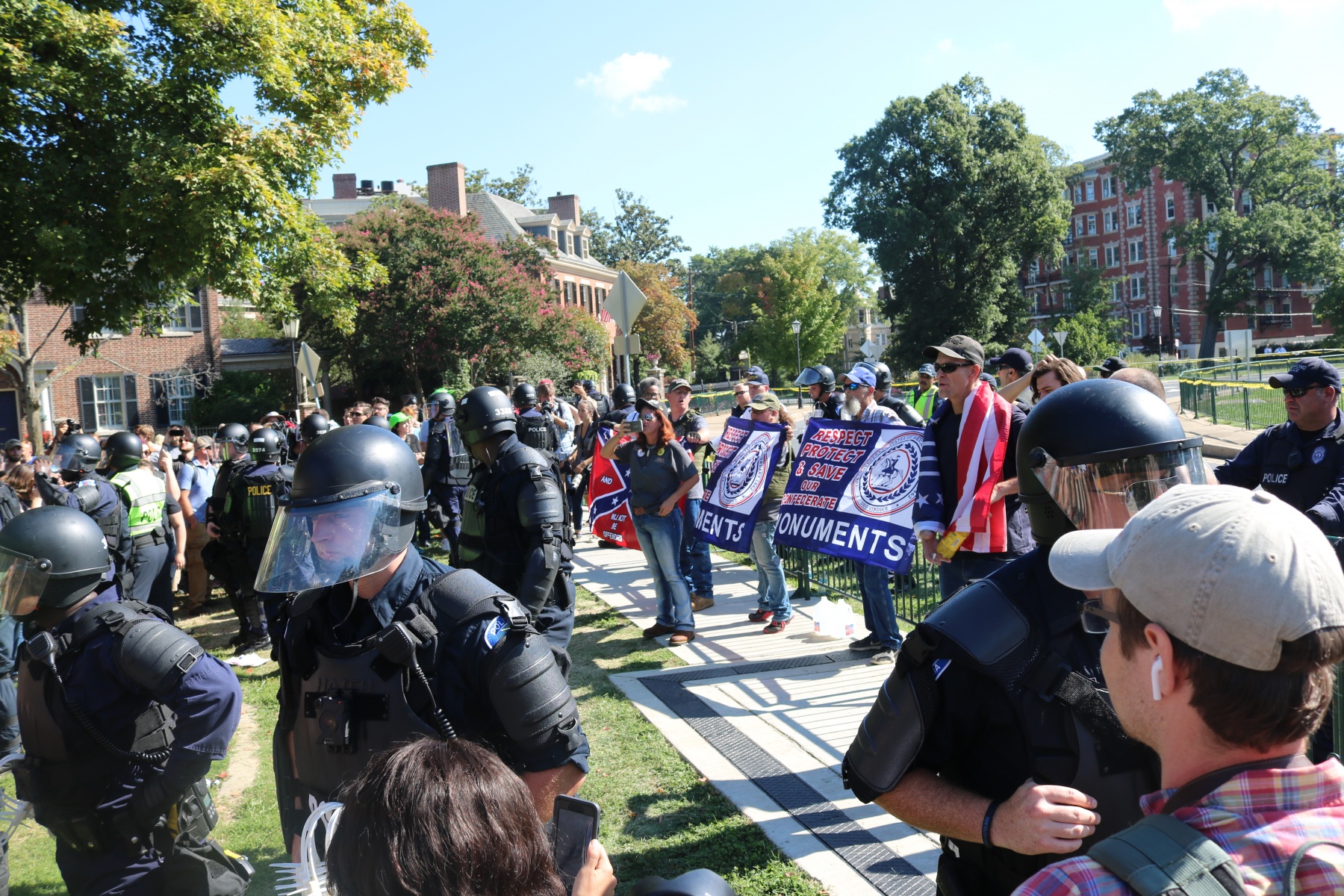 A CSA II member tried to talk to the crowd, yelling that he didn’t see any American flags.

“I’ve got mine right here,” said one man in the crowd pointing to his socks. “That monument stands for oppression, how do you think oppressed people feel having to walk by that every day?”

Surrounded by police with their backs to the gated off monument, members of CSA II left after less than two hours.

A few pro-statue folks remained, one woman in a Confederate flag t-shirt compared being from the South to being a minority.

“Being from the South is a crime, I can’t even wave my flag. Land of the free my a--,” she said. “Everyone already has their opinion, they don’t care about mine.”

A few separate neo-Confederate groups showed up throughout the day only to be met with a perpetually large crowd of counter-protesters. Eventually protesters began dispersing from the monument to parade through the Fan. The police removed the precautions set up in the wake of Charlottesville, including riot gear, gating around the monument and surrounding homes, and trucks from Public Works blocking Monument Avenue.

Though leaving their own protest before noon, CSA II hit more troubles on their way out, springing a flat they claim was caused by a slashed tire. A GoFundMe page set up by the group to help them leave has since been removed. The group posted on their Facebook page Saturday night that they had been “extracted safely.”