Day 1 of Training Camp for the Washington Redskins 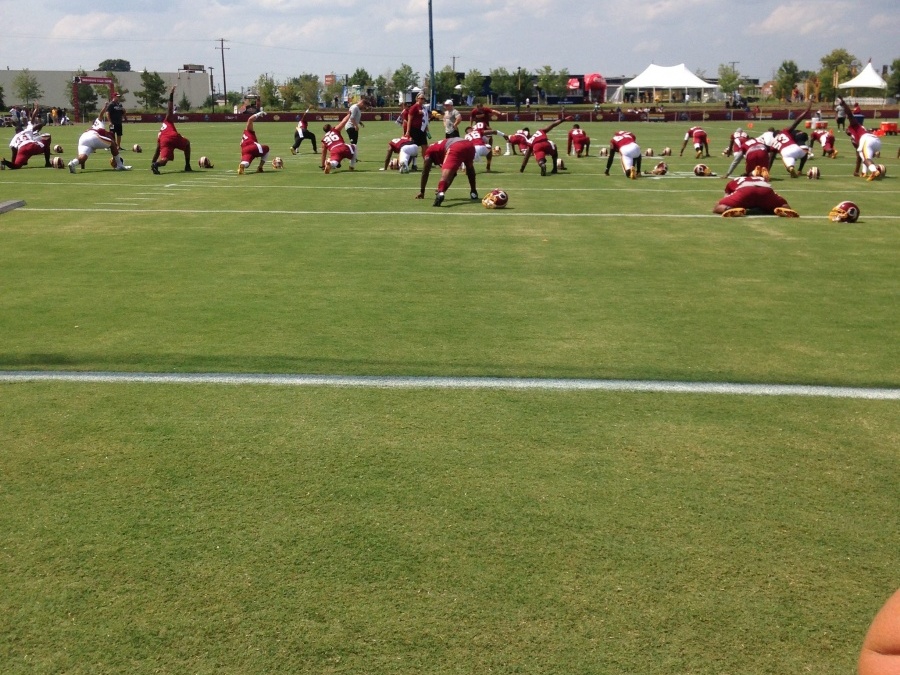 Day one of Redskins Training Camp was definitely a scorcher, with a heat index of 109 degrees during the Skins afternoon practice. Other than a lot of sweating, from the fans to the players, everything went according to schedule for the Redskins as they officially began their 2016-17 season.

Throughout practice, quarterback Kirk Cousins looked to have greater control of the offense, taking more of a leadership role knowing he’s the guy at quarterback for the Redskins.

“Right now it’s all talk, but there’s no doubt that you have more comfort when you’ve played and been the starter and been out there and had experiences,” Cousins said.

Head coach Jay Gruden sees not only a difference in Cousins but the team as well.

“Not just him, I just think the whole team rallying around him and knowing who the quarterback is, is very important,” Gruden said.

Also, guys like cornerback Bashaud Breeland and tight end Jordan Reed looked great during one-on-one drills, looking to build off of what were career years for both last year. Something Redskins fans should be excited about.

A position battle that intrigued me today and will for the rest of training camp is the battle going on at running back. Right now, Matt Jones is the guy, but there is a question of if he can hold on to the top spot on the depth chart by the time the regular season begins September 12th against the Pittsburgh Steelers because of health

Desean Jackson being interviewed after practice on July 28, 2016.

concerns and whether he can be consistent enough to catch the football out of the backfield.

The Redskins strongest position coming into training camp is at the linebacker position. Even with the loss of linebacker Junior Galette, second-round pick from a year ago, linebacker Preston Smith, continues to improve as he enters his second year in the league.

“You know, he’s got a ton of ability and it’s our job to get more out of him. He’s bigger, he’s stronger, he’s faster this year. I think he’s going to be a heck of a pass-rusher for us for a long time,” Gruden said.

The opening of training camp today didn’t provide a lot of noteworthy material, but what it did provide was a look at a confident team that believes they have all the right pieces to repeat as NFC East champions.

The Redskins will be back on the field tomorrow with another 10:35 am walkthrough and a 3 pm practice.