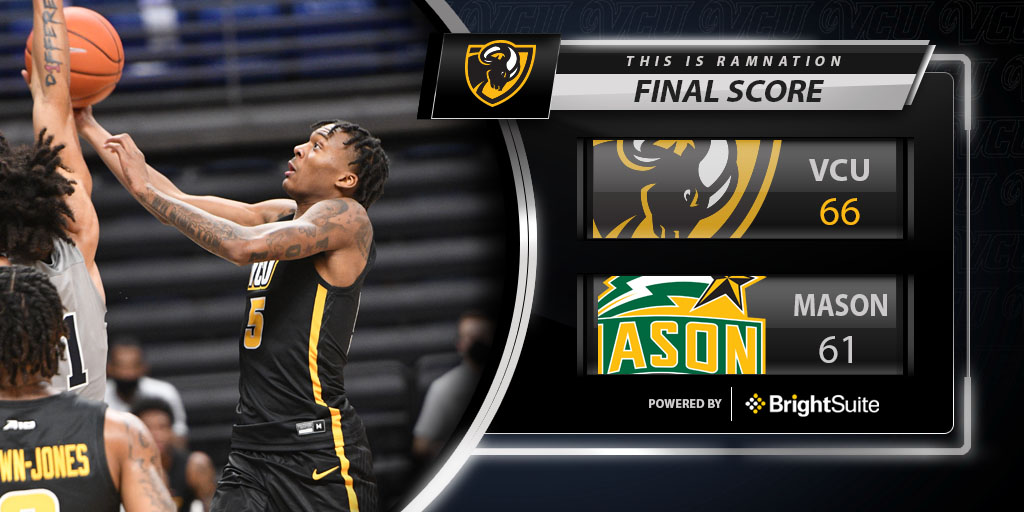 Freshman guard Tyler Kolek started the game hot from behind the arc, knocking down back-back threes for the Patriots to take a 10-5 lead into the under 16 media timeout. Then baskets from Tre Clark and Bones Hyland shaved the Patriots lead to just 5 with less than 10 to play in the first half. The Rams held their first lead of the game with 4:35 left in the first half but they weren’t able to take it into halftime, after George Mason sophomore guard Bahaide Haidara stole an Adrian Baldwin pass and took it the length of the court to score and give the Patriots a 1 point advantage at the halfway point. The black and gold turned up the heat coming out of halftime, with Bones Hyland and Vince Williams each burying a 3-pointer to spark a 12-2 run over more than four minutes midway through the second period to provide the Rams with a 53-39 cushion with 10:44 left in the game. The Rams controlled the game for the final 10 minutes of play to win 66-61 after some missed free throws down the stretch. VCU held George Mason to just nine field goals (9-of-27) in the second half and the Patriots were 1-of-8 from 3-point range after halftime. VCU has won five straight games at EagleBank Arena, a streak that dates back to the 2015-16 season. VCU is now on a seven-game win streak, which is its longest since it closed out the 2018-19 regular season with 12 wins in a row. VCU is now 2-0 in conference play and sitting alone atop of the standings.

The story of the game was Bones Hyland. The “Bones Show” was on full display all game yesterday but especially in the second half. Hyland scored 12 of his 23 points in the second half of last night’s contest. He came through with important baskets in the final 10 minutes of regulation to fend off the Patriots, he scored 9 points in those final 10 minutes. Hyland finished the game with his first double-double in the black and gold. In his 34 minutes of play, Hyland scored 23 points, secured 10 rebounds, and came away with 3 steals.

VCU will head back home for a date with the Rhode Island Rams on Saturday, Jan. 7 at 2 p.m. The game will be broadcasted on CBS Sports Network.