Rams Battle Bonnies In The Biggest Game Of The Year 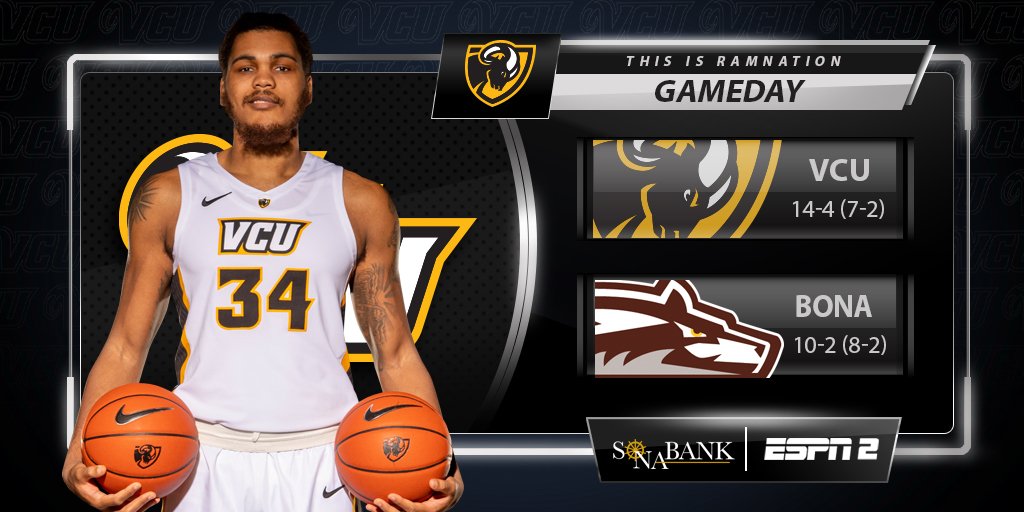 RICHMOND, Va. — VCU is hosting St.Boaventures at the Stuart C. Siegel Center on Feb. 12 for first place in the Atlantic 10 standings.

St. Bonaventure is led by Head Coach, Mark Schmidt. Schmidt is now in his 14th season in charge of the Bonnies after coaching at Robert Morris for six seasons. While in Olean, Schmidt has become the all-time wins leader in program history. The Bonnies finished last year with their sixth consecutive season of double-digit conference wins, the longest active streak among all Atlantic 10 programs. Schmidt has led the Bonnies to two NCAA tournament appearances in 2017-18 and 2011-12 after making it to the conference championship game in 2017-18 and winning the conference championship in 2011-12. St.Bonaventures were picked to finish No. 4 in this season’s A-10 Preseason Poll. So far this season the Bonnies are 10-2 overall, and 8-2 in conference play. They defeated VCU 70-54 the last time these two teams played earlier this season.

The players to watch in this game are Osun Osunniyi for St.Bonaventure’s and Bones Hyland for VCU.

Osun Osunniyi is a 6’10 center from Pleasantville, N.J., currently averaging 10.8 points, 9.3 rebounds, and 2.4 blocks per game. The junior was a preseason All-Conference Third Team and All-Defensive team selection. Last season Osunniyi earned All-Conference Third Team and All-Defensive team honors after averaging 10.8 points, 8.4 rebounds, and 2.5 blocks per game in 24 contests. He helped his team achieve an 11-7 record in conference play which gave his team a 6th place finish. As a freshman in 2018-19, Osunniyi was named to the Atlantic 10 All-Rookie Team as well as the A-10’s All-Defensive Team. He Ranked sixth in the nation in blocked shots (2.6 per game), which led all NCAA Division I freshmen in blocks. Osunniyi is a constant lob threat on one end and a defensive anchor on the other. On the offensive side, as soon as an opposing defender leaves Osinniyi to help, he immediately becomes open for an alley-oop. Sometimes Osunniyi is even open with an opponent standing right next to him, as long as the pass is accurate. With his 7’8 wingspan and good leaping ability, there are only so many players that can compete with Osunniyi when the ball is in the air. On the defensive end, Osunniyi’s unique blend of size, length, and athleticism makes him a menace. Everyone knows about his 2.4 blocks per game, but the stats don’t show you how many shots he alters. Osunniyi is the type of player you have to think about every time to try to make a basket, whether it is because his freakishly long arms are right in your face or because you know he is on the weak side getting ready to erase away any hope you had at scoring. Players like Osunniyi affect the offensive players’ decision making every time down the floor.

Nah’Shon “Bones” Hyland is a 6 foot 3 sophomore point guard from Wilmington, De. He is a playmaker on both ends of the floor, whether it be jumping in the passing lanes for a steal or hitting a step jump shot with a hand in his face. The preseason All-Conference Third Team selection currently leads his team in scoring and steals at 19.2 points and 2.1 steals per game. Hyland is coming off a good game against Dayton where he scored a team-high 19 points, going 3 of 5 from downtown. He also chipped in with 5 rebounds, and 3 assists in a hard-fought win against the Flyers. Hyland has had eight 20-plus point games in his sophomore campaign, and he currently ranks No. 3 in A-10 scoring this season. Before Tuesday’s game, Hyland was on an absolute tear, scoring 28 points against Dayton, 24 against La Salle, and 23 against Rhode Island. The sophomore has led a young Rams team to the second-best record in the A-10 and possibly a chance at a regular-season championship.

Tip-off is set for 7 p.m. on Friday, Feb. 12 at the Stuart C. Siegel Center. The game will be broadcasted on ESPN2.

Are You Ready To Go

Birdhouse In Your So