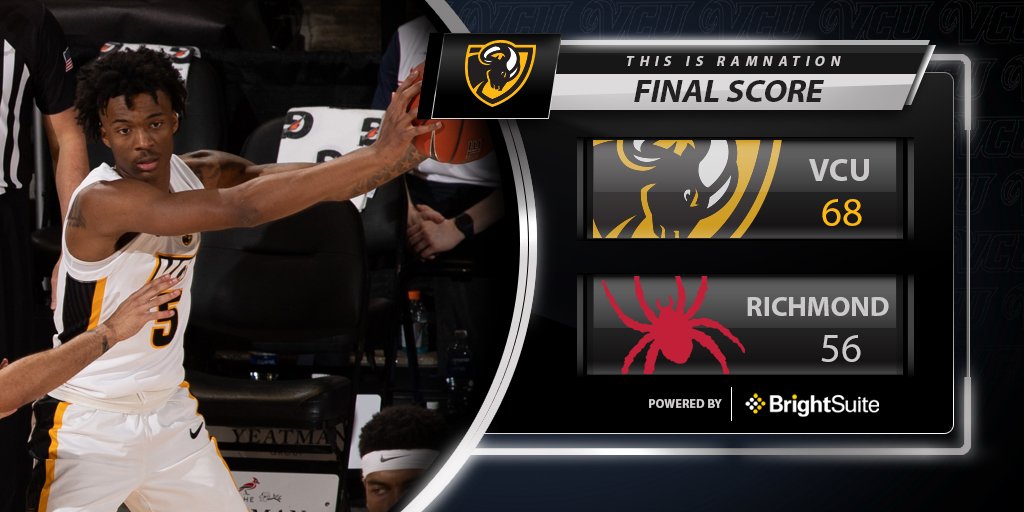 RICHMOND, Va. — VCU defeated Richmond 68-56 at home Wednesday, Feb. 18. Yesterday’s win has the Rams on a 6 game winning streak and atop the Atlantic 10 standings.

Yesterday’s game started slow for both teams. At the under-12 media timeout, the Rams and Spiders were all knotted up at 6 apiece but the next four minutes of action would see both teams triple their scoring as the game remained tied, this time at 18 all. Trailing by five with eight minutes remaining in the first half, sophomore forward Hason Ward threw down a dunk and sparked a 16-4 VCU run that spanned six minutes of game time. The run helped the Rams secure a 32-24 advantage at the break. To start the second half the Spiders came out swinging, going on a 9-2 run in the first four minutes of the play to trim the VCU lead to just one. At the under-12 media timeout, the game was tied up once again, this time at 41 apiece. With just over eight minutes remaining in the contest, Richmond cut the VCU lead down to just one, but then the Rams proceeded to outscore the Spiders 17-6 to end the game. Sophomore guard Bones Hyland recorded his second career double-double to lead the way for the Rams. He finished with 20 points, 12 rebounds as well as six assists. Freshman guard Ace Baldwin Jr. scored 10 points, collected seven rebounds, and recorded four assists, while fellow freshman Jamir Watkins tallied 10 points, dished out three assists, and grabbed three rebounds off the bench for the VCU

The story of the game was the Rams lockdown defense. VCU held Richmond to a season-low 56 points while limiting their shooting to just 32.8% from the field and 15.8% from behind the arch. The Rams finished the game on a 7-0 run while holding the Spiders scoreless in the final 3:08 of action. VCU did not force many turnovers against the Spiders but their outstanding rebounding ended most of Richmond’s possession after just one shot, with the Rams outrebounded the Spiders 43-27.

VCU improves to 55-31 all-time against Richmond, including a 4-3 record in the Mike Rhoades era. The Black and Gold are now 16-4 on the season and 9-2 in conference play. The Rams’ next scheduled contest will be on Saturday, Feb. 20 when they match up with instate rival George Mason at the Stuart C. Siegel Center.

Stop & Think It Over

Stop & Think It Over