Rams Take Care Of Hawks In A-10 Opener 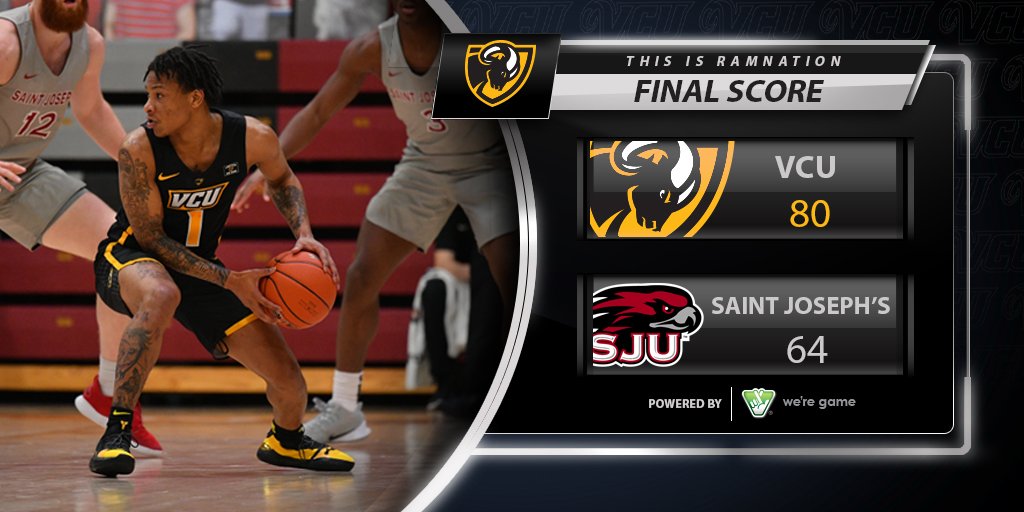 The Hawks came out firing to start the game, thanks to Dahmir Bishops’ 13 points in the first seven minutes of play. The Rams trailed the majority of the first half, down 21-15 with 8:25 left in the first half, but an impressive 17-0 run flipped the game on its head giving the Rams a 26-21 lead inside the last five minutes of the half. VCU would take a 40-32 lead into the half, with Vince Williams (11) and Dahmir Bishop (15) leading their teams in scoring. VCU carried over the energy from a strong finish in the first half into the second. The Rams pushed their lead to 12 points at the 12:27 mark and then up to 22 with 3:15 left in the ball game. Saint Joseph’s was able to stop the bleeding late to make it a 16 point deficit when the final horn sounded. Dahmir Bishop finished with a new career-high 20 points for the Hawks and Vince Williams led the way for the Rams with 17 points, 7 rebounds, 3 assists, and 3 steals. VCU has now forced 15 or more turnovers in all 10 games this season and has shot .455 or better from the field in the last five contests. The Rams will head into 2021 on a season-high six-game winning streak.

The story of the game was Mike Rhoades and his army. The Rams recorded five players in double figures for the first time since Jan. 28 last season against Richmond. Junior Vince Williams led the way for the Rams with a career-high 17 points, to go along with 7 rebounds, 3 assists, and 2 steals. Freshman Ace Baldwin also put in a career performance with 12 points, 4 rebounds, and 4 steals. Levi Stockard lll, KeShawn Curry, and Jamir Watkins all chipped in with 10 points apiece. If the Rams can continue this kind of production, it will alleviate some of the pressure on Bones Hyland to score 20 points a night. This could be key for the black and gold in a very experienced and deep A-10 conference.

The Rams will head back home for a date with the Davidson Wildcats on Saturday, Jan. 2 at 2:30 p.m. The game will broadcasted on NBC Sports Network.