Redskins Vs Browns: what to watch for 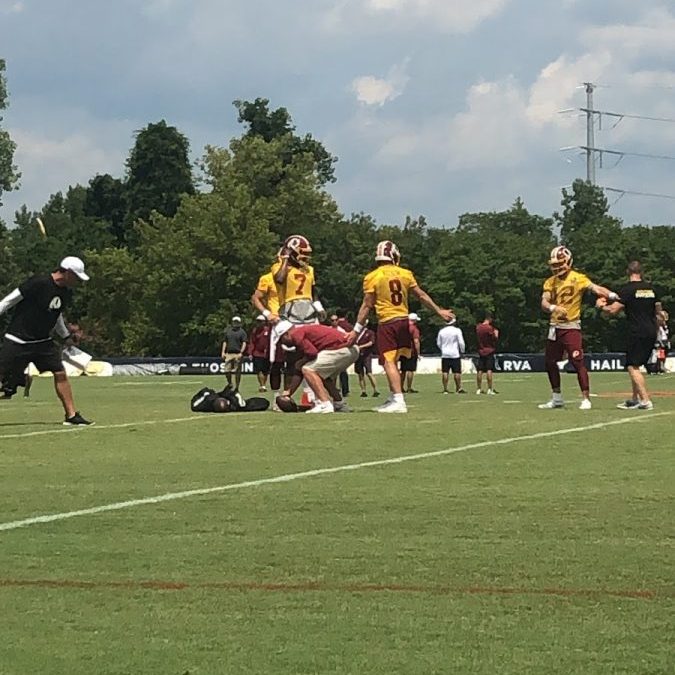 What to Watch for as the Redskins Begin Preseason Action:

The Redskins are traveling to Cleveland, Ohio to take on the Browns this Thursday as both teams begin their preseason schedule. Do not expect to see a majority of the starters play much in this game as they aren’t trying to risk injury in a “meaningless” game. The first preseason game is stomping ground for depth players and backups who are competing for a spot on the 53-man roster. Although we won’t see much from big name players such as Jordan Reed, Baker Mayfield or Odell Beckham Jr., there is plenty of competition for Redskins fans to watch in this game.

The quarterback position is arguably the most important position in all of sports. Washington finds itself in the midst of a three man competition for the starting spot. Colt McCoy was listed at the top of the first depth chart but will not play as the team is being precautionary in his recovery from offseason surgery. This opens the door for Case Keenum and Dwayne Haskins to receive more reps in the game and give the coaching staff a good chance to evaluate both signal callers. Expect the veteran Keenum to start the game as he will try to prove his ability to lead this offense under Jay Gruden. Haskins, the 15th overall pick out of Ohio State, will likely come in after Keenum and play with more backups. Gruden hasn’t tipped his hand to which of the three he is highest on. “All three of them have shown flashes of being really good and really productive, and all three have shown flashes of, ‘Hey, we’ve got to get better.”

Late in the game a mysterious #6 will check in at QB. That is Josh Woodrum, the fourth stringer that will also receive reps in the game per Jay Gruden. Woodrum is from Roanoke, Va and played his college ball at Liberty University. Woodrum has bounced around the NFL and is as much a longshot as anyone to make this roster.

The Redskins are still missing Left Tackle Trent Williams as his holdout from camp continues. 36 year old veteran Left Tackle Donald Penn signed with Washington earlier in camp as the team desperately needed depth at the position. With William’s status up in the air, Penn looks to be the team’s starting Left Tackle.

Left Guard is the other position on the offensive line with uncertainty. The Redskins brought in former Giants first round Left Tackle Ereck Flowers with the expectation that he will transition to playing guard. Flowers hasn’t exactly opened eyes so far in camp which gives rookie 4th round pick Wes Martin a solid chance to earn a starting job. Look for one of these players to gain the upper hand in their competition. The right side of the line will be a strong unit for this Redskins offense with a healthy Brandon Scherff and Morgan Moses returning.

The Redskins 2019 rookie class has given fans an abundance of hope so far in camp. There’s a lot of excitement around the future franchise quarterback, but that is easy pickins. It’s not hard to see why people are going crazy about the prospect of Montez Sweat when you see his freakish ability. Sweat had a minor injury to his calf last week but there is still a solid chance he suits up against Cleveland.

2nd round pick Terry McLaurin has been outperforming expectations. “I didn’t know he was this good,” Gruden said. He has been actually one of our better players in camp.” Look for the former Buckeye to showcase his speed and hands in his first NFL action. Another rookie receiver garnering attention has been Kelvin Harmon. The 6th round pick referred to as “Little Julio” by Haskins because of his size and speed had an excellent practice on Tuesday as he closed out the offense’s final drive with three catches and a TD.

Two rookies on defense who will most likely make the final roster are Jimmy Moreland and Cole Holcomb. The former JMU Duke Moreland has made plenty of plays as an undersized corner since he appeared at rookie minicamp.

Holcomb received tremendous praise from coach Rob Ryan. “I think he’s going to do some great things, and I think it will be pretty obvious from Thursday on that we have a heck of a draft pick here.” Holcomb currently sits behind Jon Bostic and Shaun Dion Hamilton on the depth chart at middle linebacker.

The grind of training camp is intense for NFL players around the league. Most of the players you see on Thursday night will be fighting for their dreams of making an NFL roster. What are you watching for? Let us know on Twitter @WVCWSports!