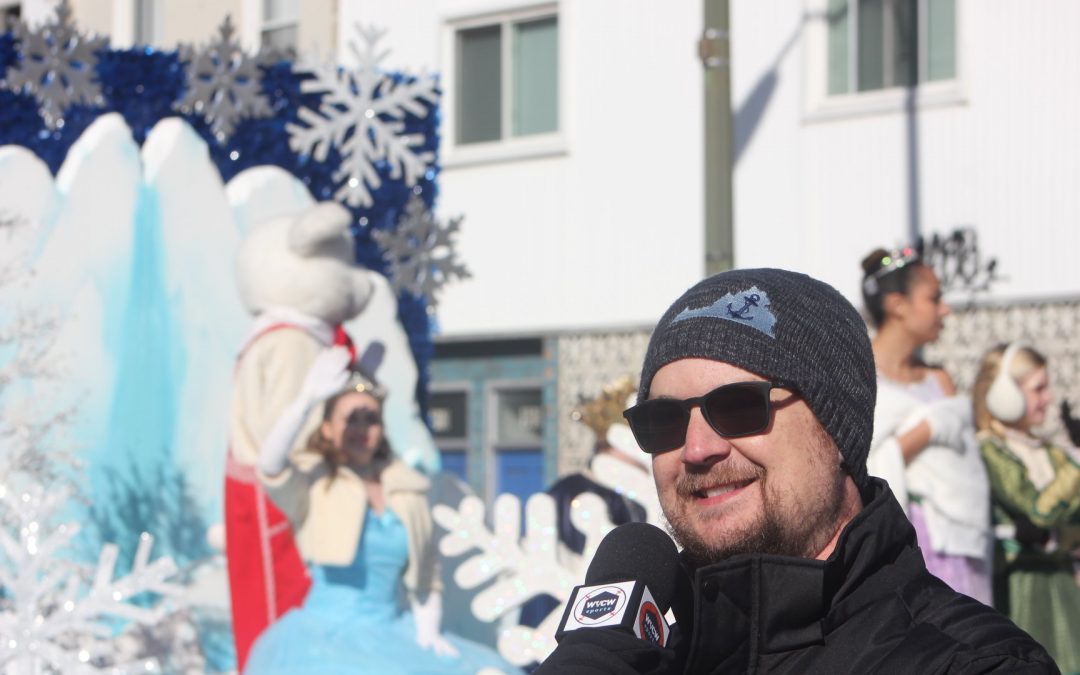 Before we begin, I understand that this is extremely self indulgent. Moving on.

When I first started at WVCW, I was a freshman with no real direction. I guess I was technically a criminal justice major who was supposed to have aspirations to become a lawyer… but I didn’t really want to. From the moment I walked through the door of the station in the General Purpose Academic Building — as Temple was known back then — I fell in love.

Taking away the general fun of college radio — getting to play music that I liked and hanging out with some amazing people — WVCW filled a void that I didn’t even know that I had. Apparently somewhere inside me was a performer who fed off the excitement of doing live radio. I had no real ambition about it; I just wanted to play on the radio. 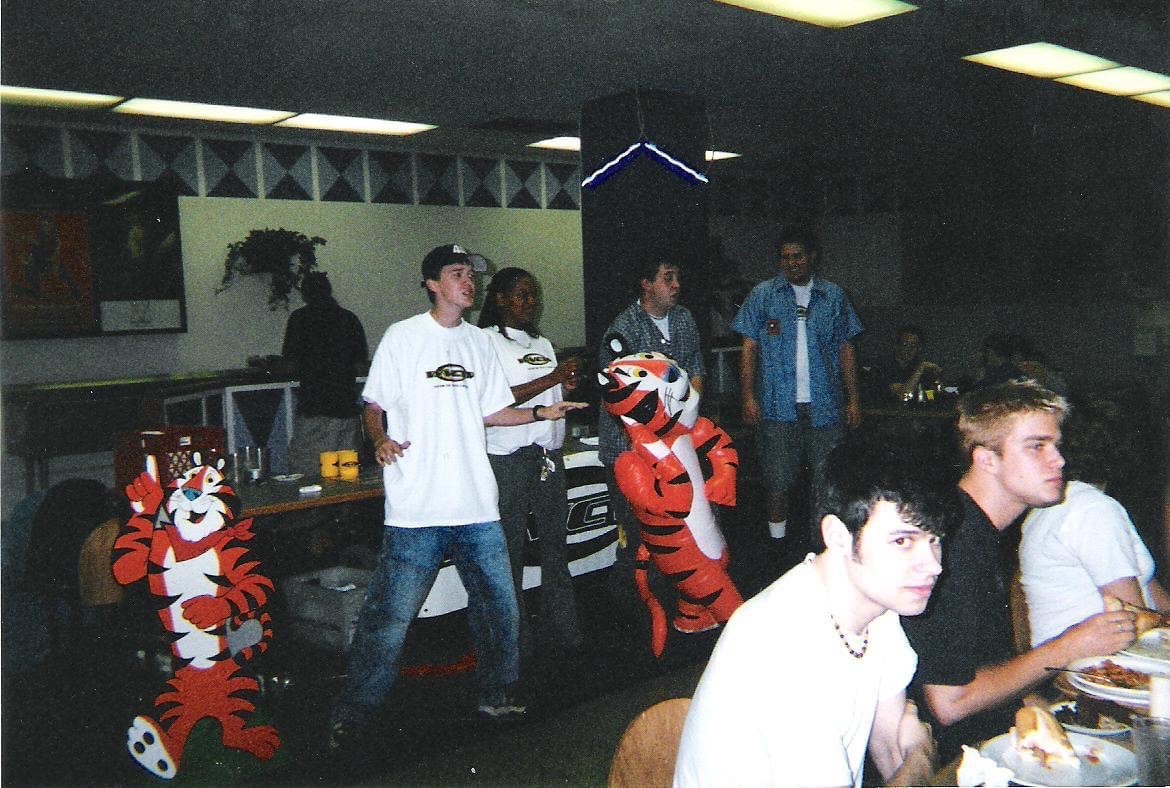 Hosting/Performing at the Hibbs Cafeteria in 1999

Circumstances changed when some issues at the station forced us to move to a new studio/office space. As it happens in college radio, the people in charge left or graduated. In 1999, when no one else wanted to do it, I became the General Manager. My goal was simple — leave WVCW in a better place than I found it. I also figured that once my time as GM was over, I would graduate and move on. It seems the Universe disagreed.

I kept getting called back. I took a little time away after graduation to do commercial radio, but since my friends were still there, I would come around to hang out and occasionally play on the radio. That occasional radio play became a routine thing, and by the spring semester of 2008, right as I was in the midst of a divorce and feeling pretty low, WVCW became an escape and outlet from the stress of my daily life.

It was then that everything changed. In March 2008, while in Florida trying to get away from everything, I received a phone call from the Student Media Director. The person who taught the radio class was leaving and they needed someone to take over that as well as advising the radio station starting in the fall semester. For reasons still unknown to me, he asked me to do it and, with some reservations, I agreed. 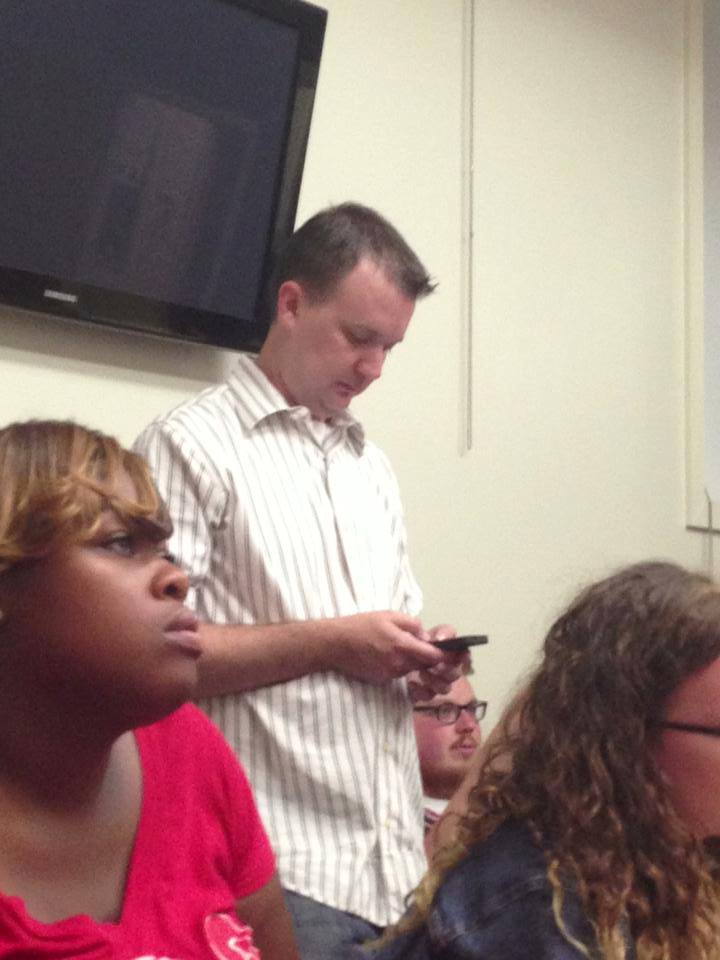 Apparently I am a professor now. (I am looking at the class roster…I swear.)

I had never taught anything or anyone. I never even thought about teaching. I was sure that I would fail and that it would be an interesting story to tell — the time that I tried being a college professor. Only, I didn’t fail. Turns out I loved it. My first class was amazing! All these years later, I still hear from and think about the people in it. My second class was also amazing … and so was my third. I started to realize that I didn’t just love teaching radio, I was good at it.

Once we changed the course to focus more on practical application of radio, I was assigned two teaching assistants to help me navigate the additional workload. Those students, Claire and Jacob, were the first of many wonderful TA’s that I was lucky enough to work with. COVID put an end to my having TA’s, but I am grateful to all of them for all of their help and, more importantly, their friendship. 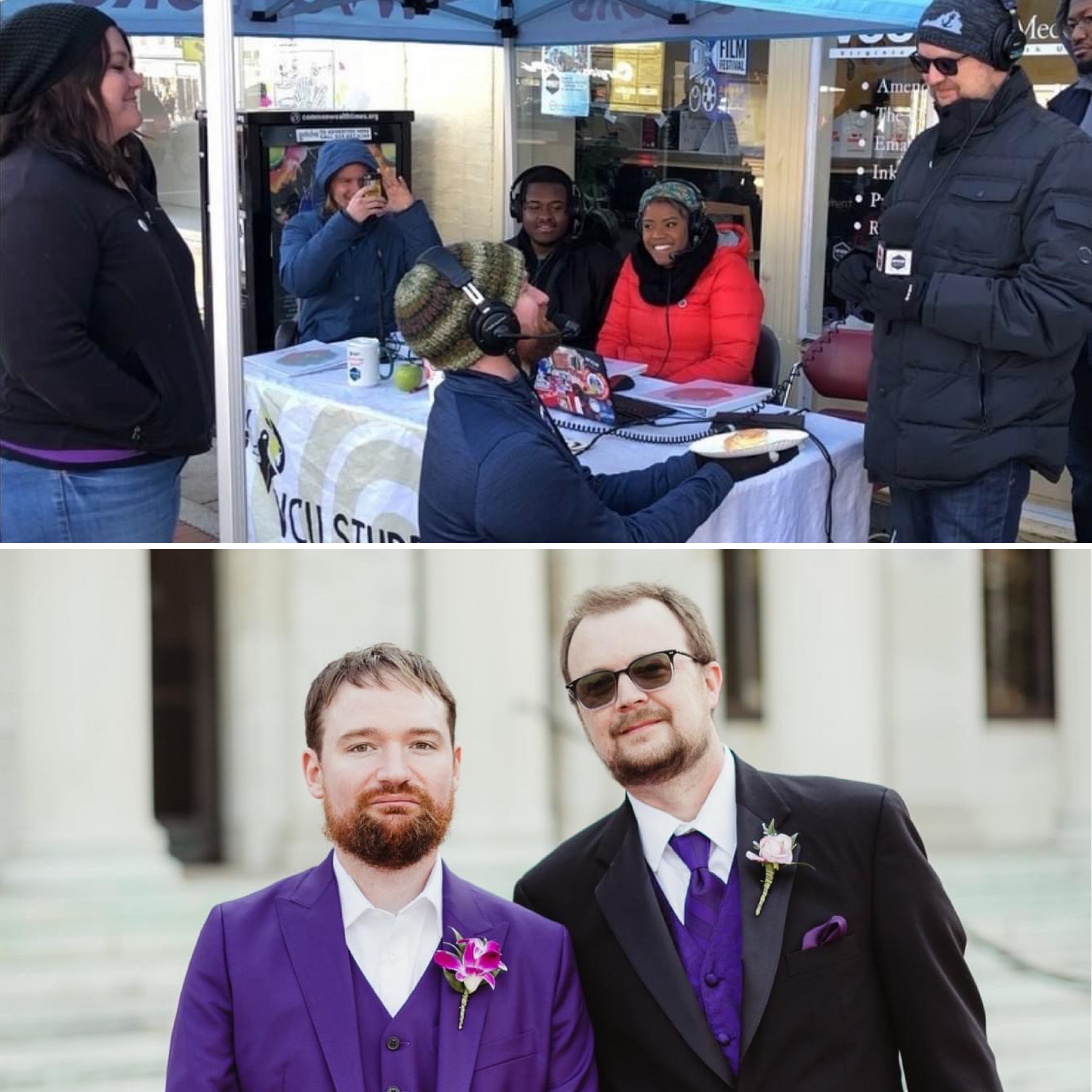 Jacob was my student, my TA, my radio partner, my co-worker.
He is one of my closest friends and I was the best man at his wedding.

As an advisor, I have worked with some amazing students at WVCW. While I have my favorites, there was never a student who walked through those doors that I didn’t care about and hope to help or inspire. I wanted them to have the desire to leave WVCW better than where they found it. Some did. Others didn’t. But I never stopped trying. WVCW is nothing without the students that run and staff it. They bring an energy that helps keep the station alive and make it feel like a home.

That brings us to now — 25 years after I walked into WVCW for the first time. If you had told me then that I would have stayed around this long, I would have probably laughed in your face. But here I am. I have taught hundreds of students in the radio class for nearly 14 years. I have worked with hundreds more at WVCW as their adviser. The students, while the most frustrating part of this job, are also the best part of it.

I have seen some amazing talent during that time — not just in broadcasting, but in art, science, and more. I have been a shoulder to cry on. I have been yelled at and hated (not by many, but a few didn’t like me at all and were visible and vocal about it). I have built some amazing relationships that I cherish. I have been extremely proud of so many of my students as I watched them grow and succeed in their lives. 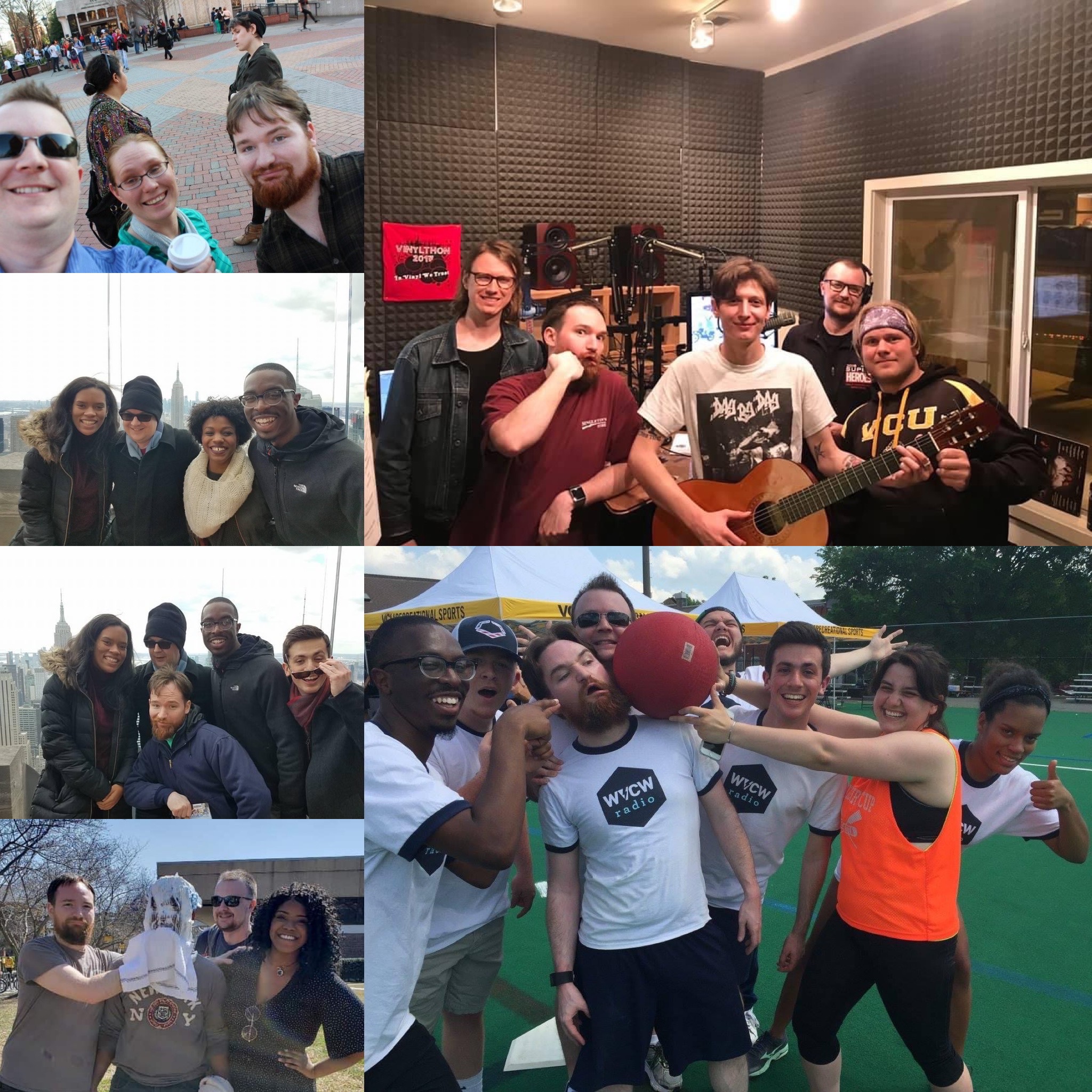 Hanging out with students over the years.

Over the course of my time at WVCW, I have watched us go from carrier current AM, to not broadcasting anywhere, to streaming online. I was so excited and proud for the students and the station when WVCW began its 2-year experiment of finally being an FM station with a shared signal with WTJU. When it ended for financial reasons, I was even more proud of the students for not giving up and transitioning back to online only with a massive fundraiser and studio renovation. I admired their resilience and dedication. Speaking of resilience, I was proud of how the students transitioned to a remote situation when COVID came in 2020. It took a while to get the hang of it, but thanks to students recording shows remotely, we were able to stay on the air with fresh content throughout most of the quarantine period. It’s been a lot.

Twenty-five years is a long time…over half of my life. A lot of my identity was formed by and has been tied to WVCW and the people there. I feel like I met the goal I made when I started as GM all those years ago: WVCW is in a better place than it was when I started. I am not taking credit for it, but I think that along with the students and professional staff, I have played a small role in helping us get there.

But life changes and not everything is meant to last forever. I have been thinking about saying goodbye to WVCW for a while now. It started a little before COVID, but after the COVID year, I found myself not having the same passion that I once had. I still love WVCW, but the fire to keep pushing isn’t what it was. Increased job responsibilities, other opportunities, and my desire to have a personal life have made it feel like I don’t have the time to commit to be the best teacher and adviser that I can be.

So, after 25 years — nearly 14 as a teacher and adviser — I am walking away. It feels like the time is right, and I know that the station will be in good hands with the professional staff at the SMC. I am also never too far away. I will be listening and following to see what happens next.

I am really going to miss it.

I am going to miss the radio station itself, especially the desk that was mine as the GM, which is still in the office now. 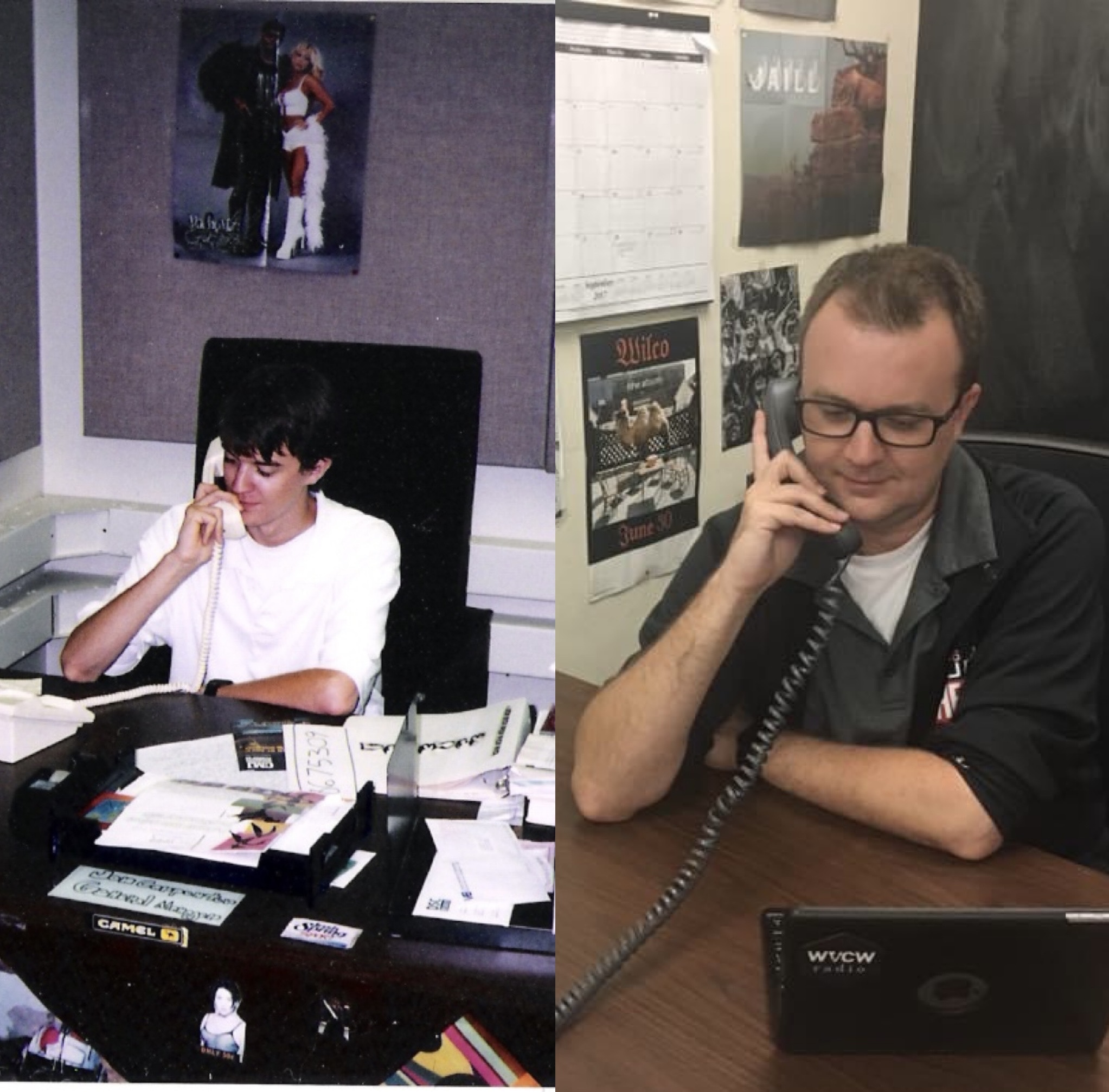 At the desk as a student, and again as the older, fatter, advisor, with way less hair.

I am going to miss the studio that Jacob and I spent so many hours building, despite the fact that we had no real idea what we were doing when we started. 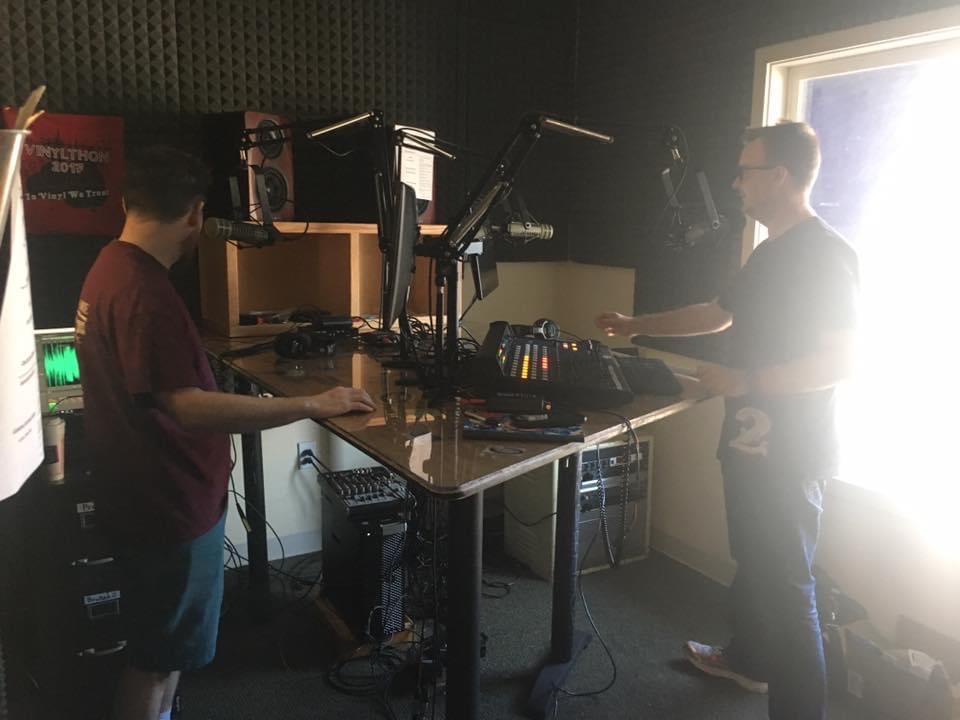 With Jacob, putting the final touches on the renovated studio

I am going to miss the Student Media Center and the other student publications. Some of my favorite experiences were helping the leaders of the other media groups.

Mostly though, I am going to miss the students. Sharing my love of radio with students and watching it spark something in them is one of my favorite things in the world. Watching students learn, grow, and succeed has been the honor of a lifetime. 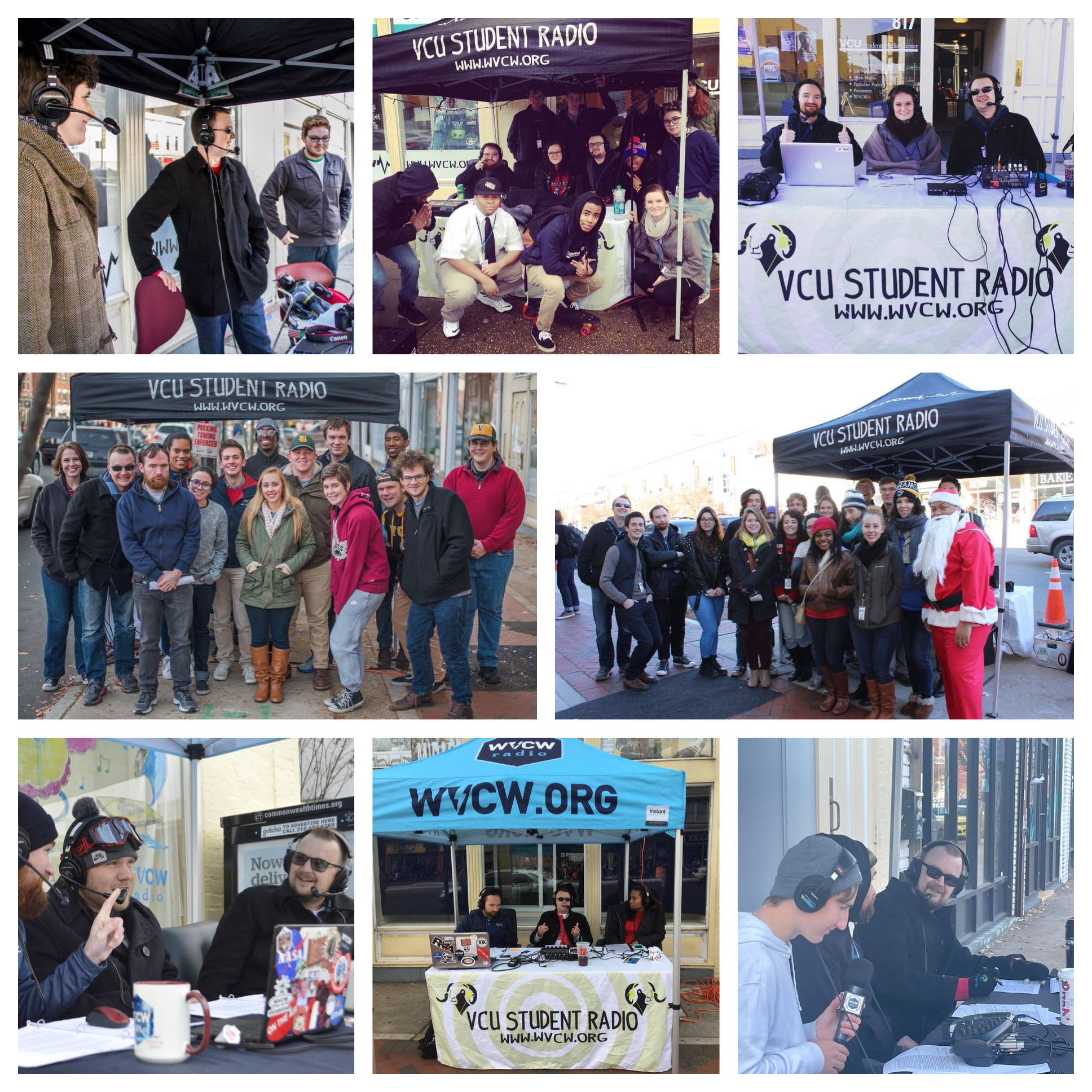 With the many students who helped make the Dominion Energy Christmas Parade broadcasts my favorite event each year.

Thank you VCU, for allowing me to spend a quarter of a century at a place I love, doing something that I love, with people I have loved doing it with.

PS: Okay…honestly, I may miss the Christmas Parade broadcast most of all.

Best We Ever Had

I Miss Those Days

No Friends In The I