VCU Bounce Back Against George Washington 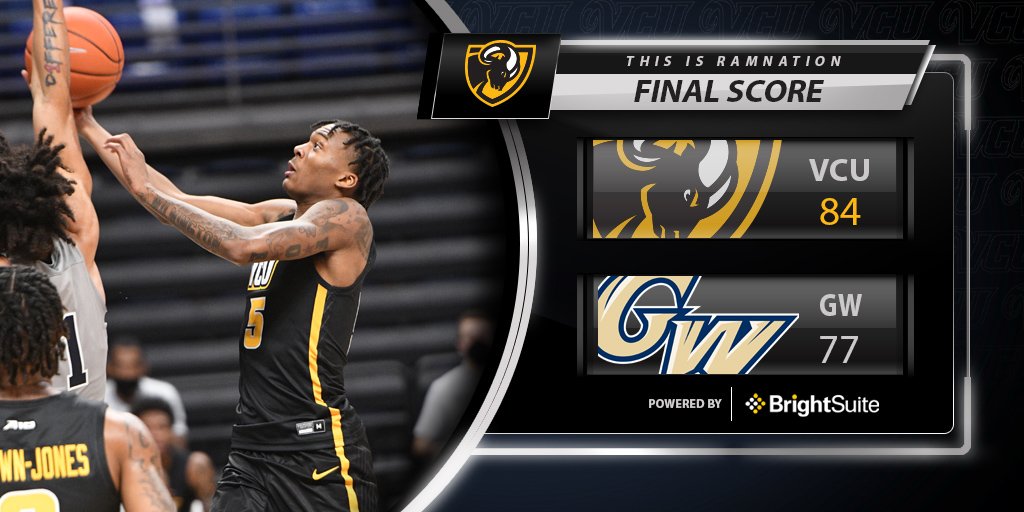 The first half was very hard-fought. The Rams got out to a 6-0 start after a lay-up and poster dunk from Corey Douglas, but a pair of three-pointers from the Colonials helped them retake the lead by 1 point at the 14:31 mark. The Rams retook the lead at the 12:50 mark as their steals started to translate into points. With less than 8 minutes to play in the half, the Rams were posing for a double-digit lead but sophomore guard James Bishop had other ideas. Bishop knocked down a straight line three to push VCU’s lead down to four. The Rams would go into the half on a 5-0 run after two made free throws each from Hyland and Ward. The Rams opened the second half with an 11-4 burst, punctuated by a 3-pointer from Hyland from the right corner to take a 52-39 lead with 16:26 remaining. VCU would push the lead to as much as 17 before the Colonials staged a late rally to trim the final margin to single digits. Hyland scored in double figures for the 12th time in 13 games with Wednesday’s effort. He was 5-of-13 from the field with a pair of 3-pointers. The Wilmington, Del. native also tied a career-high with six steals and grabbed four rebounds. Sophomore forward Hason Ward added a career-high 11 points, five rebounds, and four blocks for the Rams, while junior forward Vince Williams supplied 10 of his 12 points after the break for VCU. Freshman guard Jamir Watkins added 10 points, while classmate Ace Baldwin contributed eight assists and four steals for the Rams. VCU shot .534 (31-of-58) from the field and outscored George Washington 50-28 in the paint. James Bishop led all players with 24 points for George Washington.

The story of the game was turnovers.VCU forced 23 George Washington turnovers, including 14 in the first half, the Rams outscored the Colonials 23-13 off those miscues. The Rams also committed 20 turnovers themselves, resulting in 13 points for the Colonials. There were multiple times in the game where both teams were just passing each other the ball instead of to their teammates. The Rams have now forced at least 15 turnovers in every game this season.

The black and gold are now 10-3 on the season and 3-1 in conference play. VCU is scheduled for a 10-day break, following the postponement of Saturday’s game at Richmond. The Rams’ next scheduled contest will be on Wednesday, Jan. 20 when they take on St. Bonaventure at 6:00 p.m. on CBS Sports. Network.