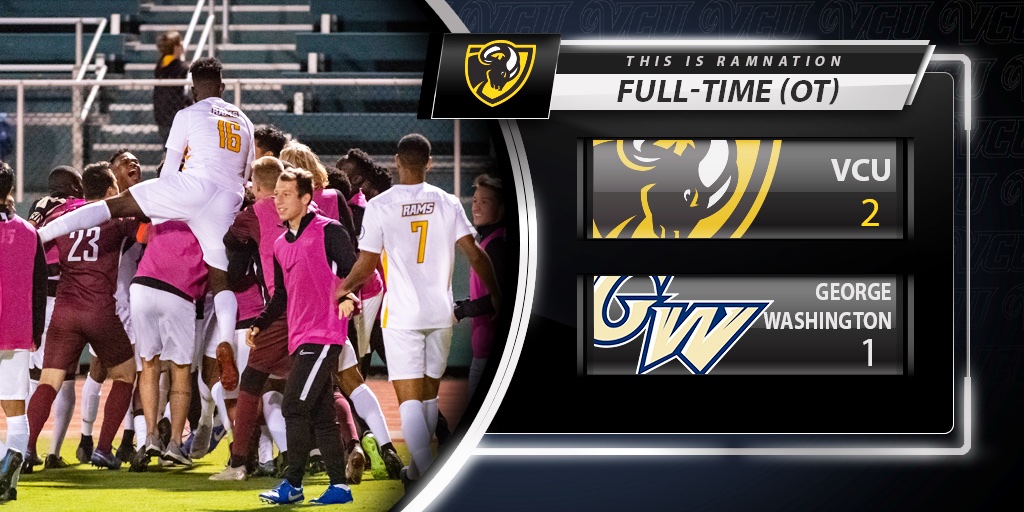 Following VCU’s 2-0 defeat to Davidson College, the Rams rebounded with a win at Sports Backers Stadium in a 2-1 victory over the George Washington Colonials. VCU Men’s Soccer moves to 3-3-2 on the season.

VCU started the game off strong with their first chance coming just 55 seconds into the game.  Freshman midfielder William Hitcock took a shot from just inside the box, but it curled into the hands of George Washington’s goalkeeper, Justin Grady.  In the 10th minute, VCU had another chance to get on the scoreboard.  Fiorre Mane, a redshirt-junior midfielder, got on the end of a cross inside the box, but his shot was saved comfortably by the keeper.  Then, on the counter after Mane’s missed chance, George Washington found the back of the net when Oscar Haynes Brown drilled the ball into the back of the net in the 11th minute.

Looking to equalize right away, VCU’s Ethan Manheim, a sophomore defender, got onto the end of a corner in the 12th minute, but his header went just over the bar.  Just eight minutes later, Ethan Manheim leveled the score after heading the ball into the back of the net.  Manheim was assisted by a pin-point corner-kick delivery from Toranosuke Abe, a senior defender.

Ethan Manheim, who is a natural defender, was utilized as a center-forward in this game, and not for the first time this season.  Coach Giffard and the VCU coaching staff’s decision to place him at center-forward paid off as the 6’5” Virginia native was a constant threat in the box for the Rams.  Manheim’s presence in the box combined with Abe’s precise set piece-taking skills, allowed the Rams to create a number of goal-scoring chances.  This was evident again in the 25th minute when Manheim headed the ball just inches over the bar after another freekick delivery by Abe.

VCU added more pressure during the first half, outshooting the Colonials 6-2.  However, both teams went into the break level at 1-1.

In the second half, VCU picked up where they left off creating numerous chances and controlling possession.  In the 62nd minute, VCU came close to scoring after a freekick by Abe found freshman forward Elton Quintanilla.  However, Quintanilla’s header was saved by Grady, who denied the freshman his first goal of the season.

VCU’s constant pressure and creation of chances forced George Washington to spend the majority of the second half defending.  The Rams outshot the Colonials 7-1 in the second half.

VCU’s last two shots came in the dying minutes of the game.  Jonathan Kangawa, a freshman midfielder, was inches away from grabbing the winner for VCU in the 89th minute, but his shot was blocked and rolled just wide of the post.  With everyone in the stadium still on the edge of their seat, Manheim had the last shot of regulation time in the 90th minute.  Abe delivered a dangerous ball from a corner, but Manheim’s header went just over the bar.

The game then went into overtime, which did not last long at all.  VCU found the golden goal in the 91st minute after a George Washington player failed to control the ball well and ended up putting it in the back of his own net for an own goal.  This surprising end to the match led to celebrations on the VCU celebrations on the field, the bench, and in the stands as VCU beat George Washington 2-1.

The Rams will travel to Fairfax, VA to play George Mason University in the A-10 Conference on April 10th.