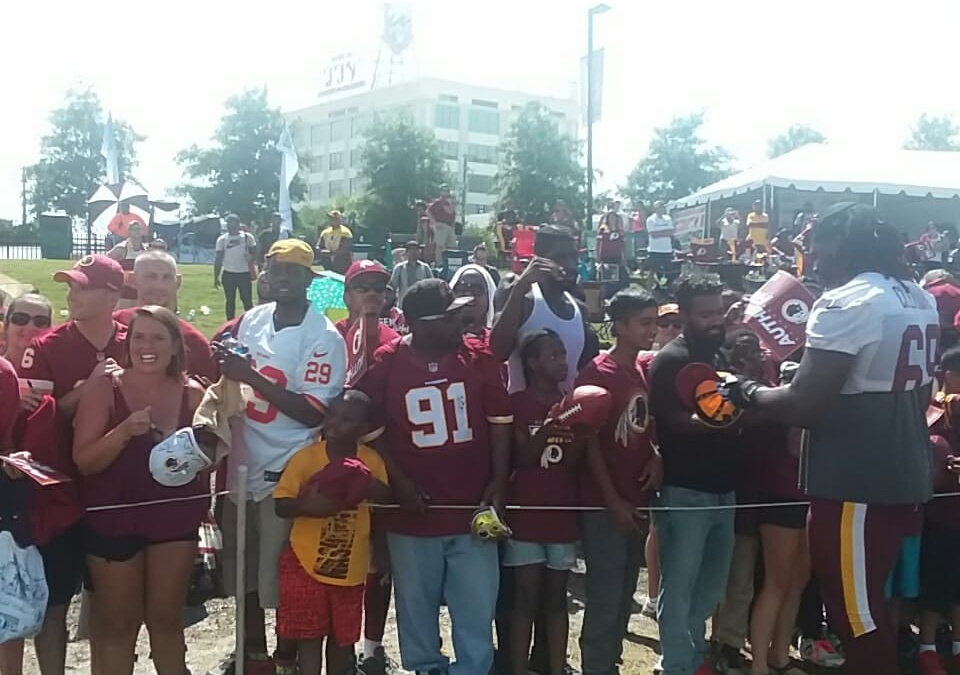 Story and Photos by Jacob SextonA tradition at during training camp here in Richmond is fan appreciation day. This is the day where the players stay out longer than usual and try to get to all of the fans of burgundy and gold. The line during the morning before the gates opened up was going around Leigh Street. Once the fans finally got in, they were accompanied by a DJ, cheerleaders, food trucks and more.

There was a sea of Redskin fans at training camp this weekend with all different kinds of gear, items and passion, showing their love for the NFL team. 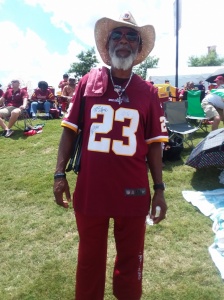 Fans of all ages were waiting to meet their favorite players. Some fans yelled for their favorite players, some just wanted signatures from any player. Some become a fan of a team from watching a team on television, watching them at a game, hearing them on the radio and so on. For some fans, they’re just becoming a Redskins fan. For some, they have been a fan of all their lives. That can be said for Linwood C. Elliott, who says he’s been a Washington Redskins fan since the 1960s.

“I been a fan since the 60’s. I know a lot about the game. I have D-Hall’s (DeAngelo Hall, recently retired Cornerback for Washington Redskins) jersey, which played flag football in my neighborhood and also the high school,” Elliott says with a huge smile on his face.

Elliott, from Chesapeake, Virginia says that he is out here rain or shine, just like the rest of the fans. His collection of autographed jerseys at the moment is at 18, ranging from Redskins Hall of Famer jerseys to Pro Bowl jerseys. Being a fan of the franchise since the 1960’s, being a fan starts from only one place—the inside. 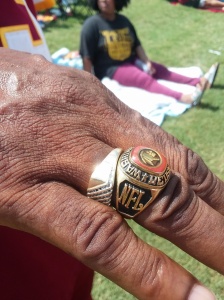 Though Elliott has made it out to more of the recent training camps, there are fans that are just now making it to it.

Local, Dustin Bennett managed to make it to his first Redskins training camp and he is soaking it all in.

Though there was a slew of jerseys present, Bennett’s jersey was possibly the most unique jersey: 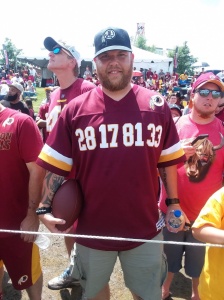 Bennett with his jersey.

“I wind up getting this jersey as a gift. It’s the Redskins of the centuries. So you have Darrell Green (28), Doug Williams (17), you got Art Monk (81) and Sammy Baugh (33) who’s pretty much our pioneer. Just a great jersey all the way around and looks like I’m the only one with it because I don’t see nobody else walking around here with it.”

Bennett, along with others are very optimistic of the upcoming season.

Through the sea of fans, there was a lot that can catch the eye of the average football fan. However, diehard Redskins fans were able to point out a former Redskins player, towering over the waves of fans. 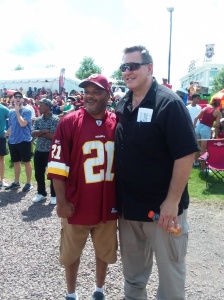 Matich taking pictures with the fans

“It was a dream to play with one of my favorite teams growing up. The fans are second to none. The history is so rich. A lot of my teammates were on those Super Bowl teams. To be able to be teammates with those guys that I watched win those Super Bowls when I was playing for other teams, it was really fun to be a Redskins,” Matich says.

Growing up a Redskins fan, playing against the Redskins for the first time in Washington D.C. was great to him. The aura in the stadium was something otherworldly to him.

“I remember my first year playing in Washington D.C. I was playing for the Colts. I went out early and stood on the field, looking around the stadium, RFK (Robert F. Kennedy Stadium) at the time and just remembered all the big games I watched on the TV at that stadium, the way the word “Redskins” was painted out in the end zone… I went out there to stand at the letters. I didn’t stand on the letters. But I got near them. I tell you, you can feel the ghost of the great players that had played there. When I say ghost, I don’t mean the players that I saw. I mean you can feel a presence of great Redskins players in that stadium. That was my experience the first time I played as a visitor.”

The analyst for the NBCSports Washington, compares the fan base as the closest to a college fan base the NFL has because of their passion. That they know what is going on about their team and that they take the time to appreciate everyone that contributed to the franchise. The fan base to Matich is far different from any other fan base in the league.

“It’s different from a fan thing. It’s more of a friend thing. If you’re a Reskins fan, you’re more of a friend of the franchise and the players are more like friends of you. It’s a different vibe. This is a connection we have because we have a passion for this team,” Matich says.

Other notes worth mentioning for that day that Josh Norman managed to disrupt passes from Alex Smith. The secondary competition is gaining steam as defensive back Kenny Ladler managed to snag an interception at the end zone, leaping over the receiver. Alex Smith and Paul Richardson Jr., two of the biggest pickups from the offseason, connected in the end zone after driving down the field during practice.

The Washington Redskins play their first preseason game against the New England Patriots, on August 9th at 7:30pm. 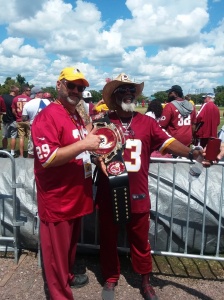 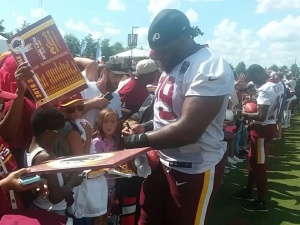 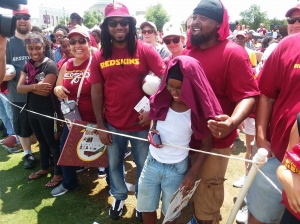 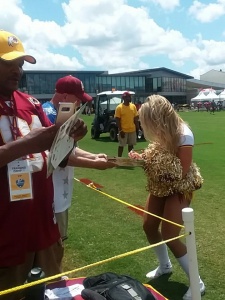 You Don t Walk Away