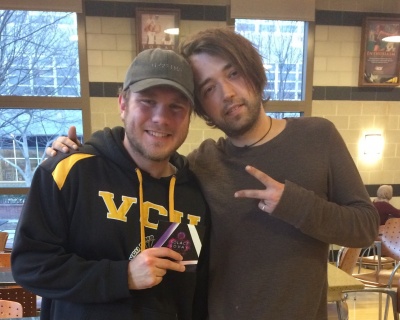 This past November, Richmond indie rock Collective, Solace Sovay, released their newest full-length album entitled “It Doesn’t Matter What it is, Just What it Seems <3.” The band has played several shows, both on the stage and in the basement, in support of the album.

Solace Sovay was formed in Northern Virginia in 2010 and has since based itself in Richmond, Virginia. Apart from being active in the local music scene, they have also toured in other parts of the country as well as Canada.

I recently sat down with longtime friend and Solace Sovay lead singer, David Loving, who shared with WVCW the band’s history as well as his philosophy on local music.

How long have you been involved in the local music scene in Richmond?

David: I’m from Northern Virginia. [Went] to community college there, and I was looking for studios to record at. In about 2010, [Solace Sovay] had our first official release, Magicfly City, and we recorded at a local studio here in Richmond for a week. It was a mind-blowing experience for some of us who had grown up on the side of a mountain in the foothills of the Blue Ridge where there was no high-speed internet or cell service. I’m sitting there at 20 years old in Richmond, recording at a professional studio, hearing the sounds and living in the city for a week. So pretty much after we recorded that, I went home and was like “I’m transferring to VCU.”

VCU played a big part in you getting started?

David: Absolutely. Going to VCU was cool because I was always in the city and I knew I wanted to study music, writing or English. So pretty much I was taking lots of English and literature classes to become a better writer, lyrically, for my band. [VCU] really helped open the doors for us, especially in the house show scene, and playing venues like The Camel and Strange Matter.

How did you manage to expand out of Richmond?

David: Over the summer we planned a tour, took what we had finished recording with us on the road, booked seven straight shows, went up to Canada, and just played every night. We had never done that before as a band. Everything we’re doing right now is out of our own pocket. No-one is going to take a chance on you until they’ve seen that you’re taking as much of a chance on yourself. We pretty much poured everything we had, went on the road, gave out the CD and made some money playing some weird shows. It was fun though.

What are some of your favorite house show venues?

David: The Yerb, which was changed to OUR House, that was the coolest venue. When I first came to Richmond in 2010, I managed to get some shows there for [Solace Sovay.] It was a legit place run by legit people. They take down walls and build stages, collect money and check I.D.s. When OUR House shut down, that was the end of a really cool era.

What kinds of benefits do you see with playing house shows?

David: They’re great in the sense that you’re guaranteed that every person who shows up to one of these house shows is there to focus on your music and your band. That’s why they’re there, for the music, and in those small areas it’s hard to put on a good show. When we do play at venues like Gallery 5, these kids come from the house shows and buy the $5 ticket because they saw us in the basement and thought it was awesome. You get so much more genuine response. When you’re playing at bars, you gotta be down with letting people just eat and talk over you all the time. It’s not my thing. I’d rather play in the basement, play all my own songs for these kids and then hear what they think.

If you were to get bigger, would you still derive that same kind of enjoyment?

David: I think some artists would say it’s almost tougher to figure out how to pull it off inside a basement. When I go up on the stage, it’s really not much different then putting on the guitar strap and just standing on the floor in a basement. If anything, it’s almost a little bit more comforting because I have a stage and space between me and the audience. In those house shows, people are right on top of you, staring at you. You’re trying to create your art and they’re literally sweating on you. It’s a totally different atmosphere, I can see how it’d be easier for somebody who is used to being on the big stage crack under pressure trying to do that. You can’t fake anything at those house shows.

What are some of the bigger venues you’ve played?

David: We played Untitled Music Festival every year for about five straight years. That was in mountains outside Roanoke, Virginia. That was great because that was a three to four day long festival, tons of bands, and we would always get great time slots. There’s 300 people out there, listening to your music at night time in the middle of nowhere. Those are definitely a lot of fun. When we end up playing in front of the most amount of people are at those festivals.

How do you think smaller venues help the local music scene?

David: They help tremendously. I envy what these kids do when they’re able to live in these houses and let people come in and play. I have no interest in living in a house where tons of bands come through all the time, but some of my friends are so passionate about wanting to help a scene that they deal with it. They’re gonna have to have some tough skin, they’re gonna have to deal with different types of people, they have to make sure people there understand that you’re in somebody’s house. A lot of people around here respect that.

For more information on Solace Sovay, visit their Facebook Page

The new album can be heard here and here

The full, unedited interview can be heard here