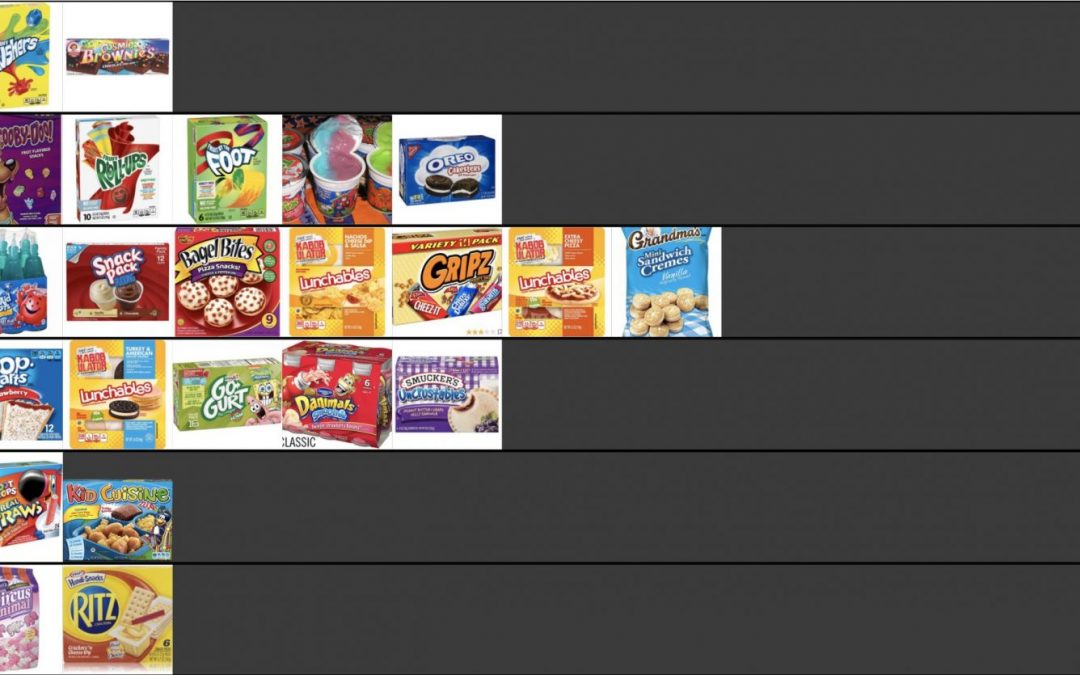 This morning began much like any other, as I sluggishly rolled out of bed I picked up my phone to catch up on the news that I missed while I was asleep. Much to my surprise, twitter had been set ablaze by a graphic tweeted out by a certain sports media company asking their followers to pick the greatest Lunchtime snack of all time. Naturally, as a man of culture, the choice is clear. Gushers. I will not hear any debate further on that subject. BUT, what I will debate on is how the other snacks rank following the people’s beloved champion.

F-Tier: Animal Crackers, Ritz Handi-Snacks: These two snacks are far and away the worst two on the list. If I opened my lunch box and either of these snacks were in there, I would be looking to trade them off in an instant. Animal crackers are just stale nilla wafers, the only reason they offer any appeal is because they’re shaped like circus animals (which are honestly pretty problematic if we’re being honest but that’s a story for another day) and god forbid I have to spread my own EZ cheese on a Club Cracker

D-Tier: Cereal Straws, Kid Cuisine: The underwhelmers of the bunch. These two items are wonderful in concept, while lacking a significant amount of follow through on the effort. As a child, I thought cereal straws were going to change the milk game. I mean, an Oreo cookie straw that turned your milk all chocolatey? What’s not to love there? Well, the problem with the cereal straws was a common problem that plagues most cereals, sagginess. Upon dropping the cereal straw into the milk, it works like a charm, but after only a few minutes of milk enjoyment, the straw began to collapse into the milk before my eyes. I was distraught. Kid Cuisine wasn’t much better. Another underwhelming option that, in concept, seems like a great idea, while in practice it doesn’t go so well. When removed from the microwave, either the Mashed Potatoes were still frozen and the Brownie was magma hot or vice versa, which when at the lunch table, is a devastating blow.

C-Tier: Pop-Tarts, Turkey/Cheese Lunchables, Gogurt, Danimals, Smuckers Uncrustable’s: Now, I’m aware I may catch some flak for this tier, but I want to be clear. This is C-Tier, these are the standard go-to lunch snacks that, when part of a package deal, could easily go for an item or two from the A tier, and even sometimes an S-tier if you’re lucky. By no means are these snacks to be considered anything less than “Average”. Pop-Tarts are a very subjective lunch snack, to me, it’s C Tier, but their range varies. Turkey and Cheese Lunchables are a solid lunch option, and sometimes would even make an extravagant feast during a field trip. Gogurt and Danimals are very different forms of yogurt, but both compact and tradeable. Smuckers Uncrustables were for purchase in my lunchroom, making them the most widely traded commodity, our speciality if you will.

B-Tier: Snack Pack Pudding, Gripz, Sandwich Cremes, Nachos Lunchable, Pizza Lunchables, Kool Aid Burst: This is a bit of an interesting tier, these snacks are all options that I would need some convincing to give up. You can never go wrong with a solid pudding. Gripz were an interesting phenomenon that I’m glad I got to witness. Again this is an item that I believed would revolutionize the way we ate Cheese-itz, Chips Ahoy, or Graham Crackers, and again I was wrong. A great idea in both concept and execution, but it just failed to catch on and grow. Sandwich cremes were a surprise on the tier list, and because they seldom appeared in the lunchroom, that’s gonna knock you down a few spots. Both the Nachos and Pizza Lunchables are the Elite of the lunchables but again made for a meal too small for the lunchroom, but large enough to be considered a feast on field trips. Kool Aid Bursts are tricky. Before I turned 9 I would’ve put these in the A, or maybe even S-tier, but these are simply too sugary to be considered anything higher than B-tier

A-Tier: Scooby Doo Fruit Snacks, Fruit Roll-up, Fruit By the Foot, Trix Yogurt, Oreo Cakesters – These are snacks that I still give the eyeball too whenever I go grocery shopping today. The old Scooby Doo fruit snacks would rank in S-tier and could hang with every other heavy hitter out there but alas, they changed them years ago. While the newer fruit snacks are quite good, nothing will ever beat the light blue Scooby Doo shaped fruit snack of old. Fruit Roll-ups and Fruit By the Foot are quality go to’s for lunch and are valuable trade assets that can net you a big return if offered to the right classmate. Trix Yogurts always snagged a great return no matter who you traded with, it’s almost as if the swirl in the yogurt hypnotized everyone into trading with you. Oreo Cakesters were coveted in my elementary school lunchroom, there was only one issue. There was only one person in the entire class who would get them packed in their lunch, and she was very anti-trade so she was difficult to convince. In the few times I managed, the Cakesters were a solid option, but they were severely overvalued in my childhood lunchroom, therefore they land in A-tier instead of S.

S-Tier: Gushers, Cosmic Brownie – This is a tier reserved only for the best of the best. The Elite of the Elite. The Chase Young’s and Myles Garrett’s of the lunchroom. Gushers are undefeated, a fruity snack with a sweet liquid center that, when placed on the trade block, would always fetch a hefty return. I myself, have seen children trade away their entire lunches for one pack of tropical gushers, which is absolute lunacy. The only other thing I’ve seen this happen with, is Little Debbie’s Cosmic Brownie. A dense fudgy rectangle with rainbow colored sprinkles arranged in the chocolatey coating that children will die for. It is by for the most iconic snack from the lunchroom and will be for years to come.