VCU Men’s Basketball Is Taking A Stand Against Inequality 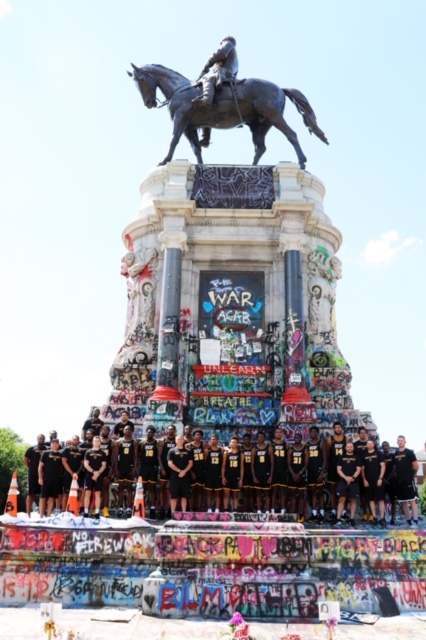 The BLM movement is once again the No.1 topic for debate across the country, after George Floyd was killed May 25 while in police custody. The Minneapolis police officer filmed kneeling on Floyd’s neck for almost nine minutes was fired and charged with second-degree murder, and the other three officers on scene during Floyd’s killing were charged with aiding and abetting second-degree murder.

Protests have been going on for over a month across the globe since Floyd was killed. Along with various legislative changes, there has been more done in 31 days than once thought possible.

“We’ve always tried to kind of educate our guys on taking advantage of the opportunities that they have,” Brunt said. “Those are things that I’ve always taught to guys I’ve coached because I had coaches who did that to me.”

VCU men’s basketball pride themself on being family on and off the court, so when head coach Mike Rhoades took charge on one of their weekly Zoom meetings, things got emotional.

“Coach really took the lead,” Brunt said. “To let those guys know where he stood, how he is supporting them, and definitely empowering them to take advantage of their voice, it got a little emotional.”

Photojournalist for The Commonwealth Times and VCU student Megan Lee thinks what Coach Rhoades and the rest of the staff are doing is great.

“ I appreciate that the coaches have come forward and acknowledged what’s happening,” Lee said. “I hope Rhoades knows that he has a greater platform as a white man and figure in the environment and that he uses it wisely.”

The issues of social injustice and police brutality are issues Brunt, who was born and raised in West Baltimore, Maryland, said he knows all too well about. He said he’s been through illegal vehicle searches and been harassed because of the color of his skin.

“Have I been sat on the curb and handcuffed, just because I’m walking down the street with a group of guys that they quote  unquote fits the description, yes,” Brunt said. “I do believe if you talk to the majority of coaches across the country that they will have a story that they could share.”

One of the main things the coaching staff is emphasizing this year is voter registration.

“Coach Rhoades is committed to making sure that we don’t have practice that day,” Brunt said. “We’re going out and encouraging people to vote and register to vote, ahead of the election.”

The right to vote is so important, Brunt said, especially with the long history of voter suppression in the U.S.

“People before us have fought long and hard to get this right,”  Brunt said. “And we need to take advantage of it.”

Rhoades and Brunt went to the 804 Coaches for Change rally last month. At least 100 schools and various sports participated in a walk down Monument Avenue from the Arthur Ashe monument. The group is currently tackling various social issues that include voting rights education, changing how youths deal with and manage personal trauma and opening communication lines in regard to racism, social injustice and inequality.

Brunt is looking forward to the upcoming season but stresses that the work off the court must not stop.

“Just because we’re back at practice, social injustice didn’t end,” Brunt said. “Let’s continue to educate ourselves and figure out ways that we can be a part of that change.”

I Want You To Love M