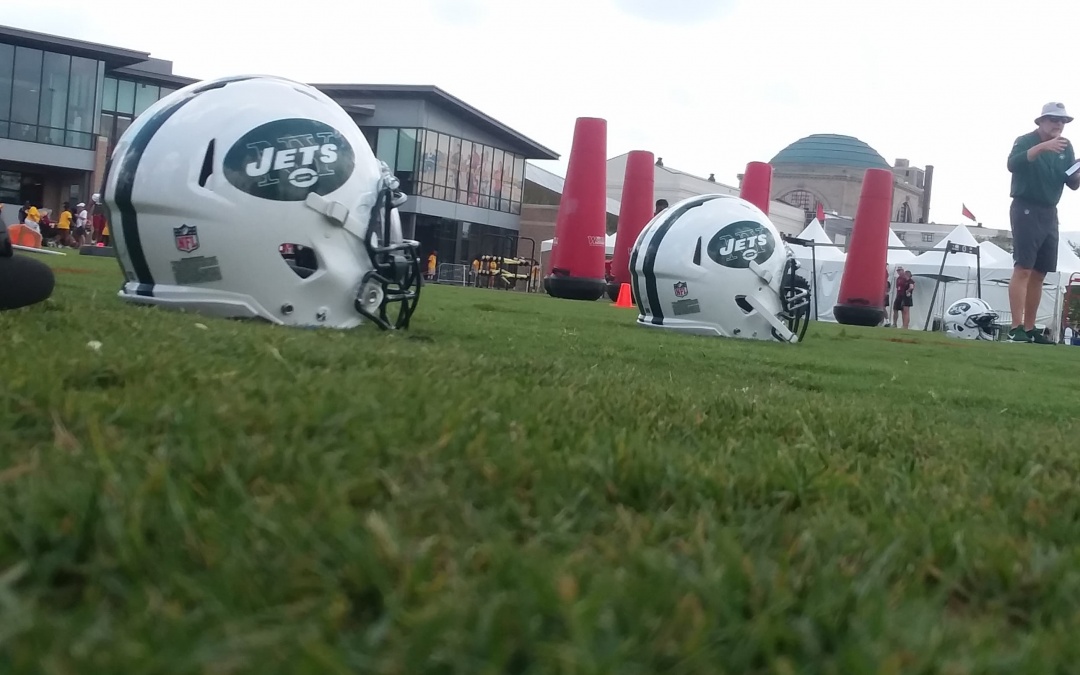 For the final week of training camp in Richmond, Virginia for the Washington Redskins, it was everything but routine. 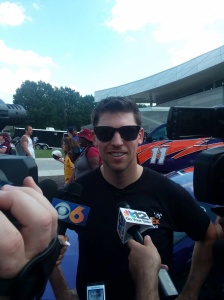 Denny Hamlin near his FedEx racecar at training camp

The week started out with Kids Day, where the training camp was taken over by the mini fans of the burgundy and gold. Multiple activities were present for the kids and players focused on visiting the kids after the practice. There was one notable fan that has payed attention to the Redskins since he was very little and that is NASCAR driver, Denny Hamlin. The Chesterfield native calls it ‘the best of both worlds’ that he is living his dream of being a racer for the former head coach for the Washington Redskins, Joe Gibbs.

“I always had dreams when I went to my very first race at RIR (Richmond International Raceway), when I was five years old… I went to my very first race and when the cars came around the very first time, it was ‘This is what I want to do.’ We worked on it from that point on, bought a go-kart… and just took it one level at a time from Southside Speedway to local tracks and luckily caught the eyes of Joe Gibbs and his race team,” Hamlin said.

Hamlin once had a Super Bowl hat that Redskins legendary quarterback, Joe Theismann signed when he was younger. However, one day in grade school, Hamlin stuck his head out the window and the hat flew off his head. He said that Theismann knows that he lost the hat. The day that Hamlin arrived at training camp, he and quarterback Alex Smith had a gift exchange. Hamlin and Smith exchanging gifts at the end of practice

The gifts also included a replica of Hamlin’s FedEx car and a replica of the same Super Bowl hat that Hamlin lost when he was in grade school. Hamlin says that his favorite memory was the ‘Golden Quarter’ against the Denver Broncos.

“I remember talking to Joe about it and he’s just like ‘It didn’t matter. I could have closed my eyes, stick my finger on a play and it was going to work.’ For whatever reason, everything worked for those 15 minutes. It was an unbelievable time and I remember going back and watching it. It’s amazing football.”

The closest that Hamlin would consider that he had a car worked as well as the ‘Golden Quarter’ did for Washington was in Loudon, New Hampshire a few years ago. He’s excited to have a playoff race in Richmond, Virginia in September.

The Washington Redskins would play their first preseason game against the New England Patriots in which they lost 17-26. Washington would suffer a blow in their running back corps where Rookie Running Back, Derrius Guice torn his ACL after a run, ending his season. Linebacker, Ryan Kerrigan says that this injury stung.

“He has come in and been nothing but a positive force for our organization and has really worked to endear himself with the fans and with the community…so to see him go down, it was a bummer for sure,” Kerrigan said at the press conference.

This wouldn’t be the only injury during the last week of training camp. Head Coach, Jay Gruden confirmed that Wide Receiver, Robert Davis will miss the season with a PCL injury after going up for a ball and landing awkwardly on his knee Saturday.

Sunday was the start of the three day joint practice with the New York Jets. The first day resulted in a couple of fights occurring with the two teams, also resulting with a fight occurring between two fans on the first day. Then on the third and final day of the joint practices, the two teams went at it once more before the thunderstorms rolled across training camp.

D.J. Swearinger, Safety for the Washington Redskins believed that they got some good quality work in despite of the first day and the last day being chippy for both teams. He stated that he felt like the Redskins dominated training camp from start to finish. 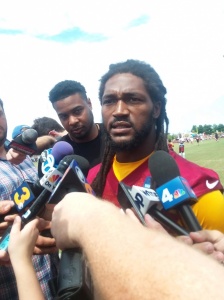 Swearinger to the media

Swearinger, along with fellow safety Montae Nicholson and the other safeties would cover former Redskin, now Jets Wide Receiver, Terrelle Pryor all training camp. There was one play where the safeties would double team Pryor on a pass to the left corner of the End Zone and Swearinger said a couple of words to Pryor, such as “garbage.”

Pryor however, on Monday would reveal that the reason he needed surgery in May was because of a fractured ankle. Originally, it was reported as a clean-up following another surgery in November for a ligament repair.

In response of revealing the injury, Bowles was asked about Pryor getting fined for the action and it wasn’t clear on if Pryor received a fine or not. 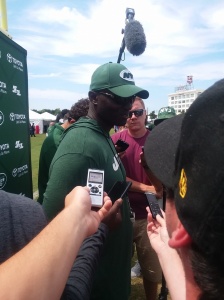 “We had a conversation. We’ll discussed our own things in-house,” Bowles said. Pryor also told reporters that he will sit out of Thursday’s preseason game against the Redskins due to a minor hip injury.

Fans of the Washington Redskins and New York Jets, Logan Edwards and Frank Ricardo would come down to training camp and both saw the fights as a barren to both teams.

“It was a waste of time with it being unproductive but it’s understanding with training camp when it’s a long day, especially when it’s hot outside,” Ricardo said. 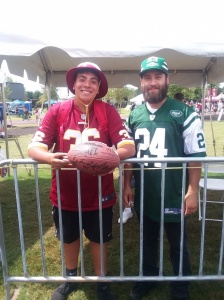 Despite of the brawls, fans were excited for other reasons. Not only to see the Redskins play against another team at training camp, but to see a local college products in action.

Former Virginia State University Running Back, Trenton Cannon was drafted by the New York Jets in the 6th round of the 2018 NFL Draft. There was all kinds of VSU fans in attendance to see Cannon in action. 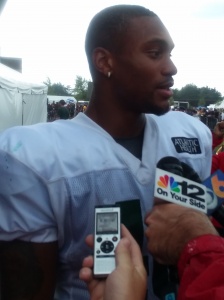 Trenton Cannon after the first day of joint practices

Tre McBride, is in his first season with the Jets and his fourth overall in the NFL. The William and Mary product was excited to come out and see how many people from Virginia are rooting for him to be a success in the league. He considers Virginia his second home. While he has been in the league for a little bit, he still runs into plenty of people from William and Mary.

“One of the scouts for the Redskins was my quarterback at William and Mary, which is really cool. Some of my buddies that I played with came out to practice and supported me. It feels like a reunion.”

According to McBride, the competition is heating up for a spot on the receiving corps. He stated that guys are trying to make plays and taking any and every experience and making the best of their opportunities. 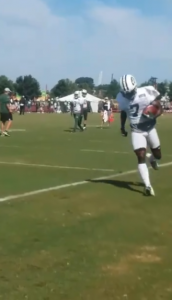 At the end of training camp, Washington’s Tight End, Vernon Davis believed that the joint practices were beneficial.

“They were very competitive,” Davis said. “They came down here, they gave their all and they gave us a lot of good work. We were able to put the fighting aside and build on it and get work done.”

Josh Norman also gave praise to Sam Darnold, the quarterback that New York drafted in the first round of the 2018 draft as well.

According to fans throughout training camp, fans are optimistic about their playoff chances for both teams.

“I think the Redskins are going to make a playoff run also,” Edwards said. “We’re going to go 11-5. I’m excited about the Alex Smith era, it has begun. It sucks that Derrius Guice tore his ACL to end the season, but he’ll come back powerful next year and he’ll make a run into the playoffs.”

“Jets going to make the playoffs,” Ricardo said. “Our future is in Sam Darnold, we got a good solid, young defense with Jamal Adams as our safety, Leonard Williams as our D-Lineman. We’re a young team, up and coming. I think we’ll make our playoff run this year.”

Both teams called a conclusion to training camp around 12:30 to attend to the media and some fans before calling it a day. Both teams haven’t played against each other in the regular season since 2015, in which the Jets won 34-20 in MetLife Stadium. Both teams play Thursday at FedEx Field. 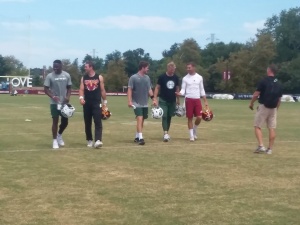 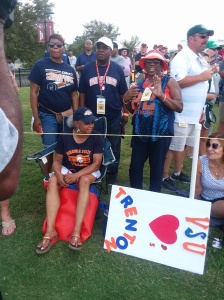 Back that Ass Up (Clean)

(This Is) The Dream