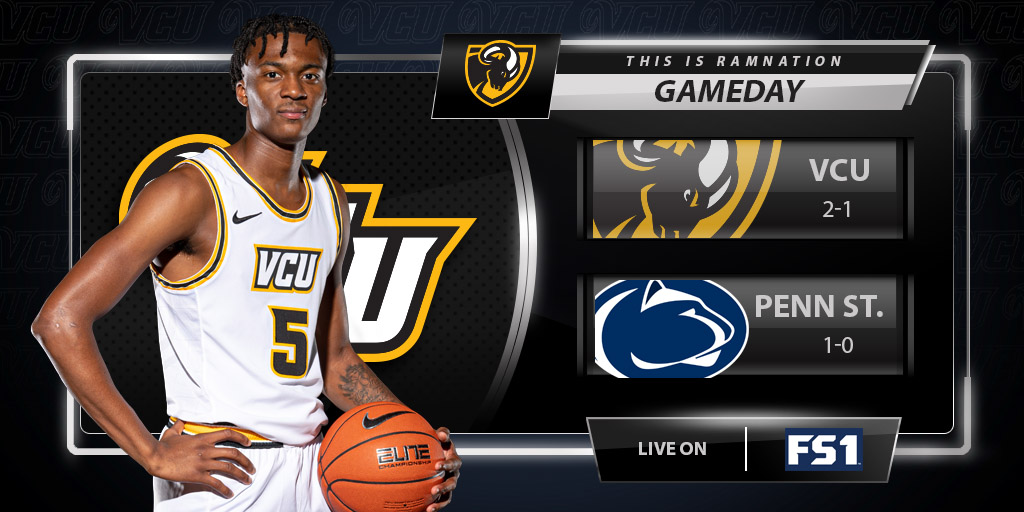 RICHMOND, Va. — After finishing third in the Bad Boy Mowers Crossover Classic in Sioux Falls, S.D. and defeating Utah State and Memphis in the process, VCU has had a strong start to their 2020-21 season.

Next up on the schedule for the Rams is a trip to take on the Nittany Lions of Penn State. This will be the first time ever meeting between VCU and Penn State. The Nittany Lions are coming off a 21 point win over VMI in their first game of the season and the Rams defeated Penny Hardaway and the Memphis Tigers 70-59 less than a week ago.

Penn State is led by Interim Head Coach Jim Ferry, former Head Coach Pat Chambers resigned in October following an internal investigation of new allegations of inappropriate conduct by Chambers. Penn State Basketball is coming off one of the greatest seasons in program history by having their first winning season in conference play in 9 years. 2019-20 saw Penn State amass 21 wins overall and 11 Big Ten victories, its second-highest total since joining the league in 1992-93. The Nittany Lions were tied for fifth in the conference standings headed into the conference tournament, the highest finish in its Big Ten era. The Nittany Lions were positioned for an NCAA Tournament berth before the COVID-19 pandemic canceled their postseason opportunities. Replacing Lamar Stevens, the second all-time leading scorer in program history, is going to be a tough ask for coach Ferry this season with a very strong Big Ten schedule just over the horizon.

The players to watch in this game are Jamari Wheeler for Penn State and Vince Williams for the Rams.

Wheeler has not been much of a scorer in his career at State College but he is a star on the defensive end for the Nittany Lions. He started all 31 games last year and led the Big Ten in both steals per game and total steals, becoming the fourth-straight Nittany Lion to accomplish that feat. The 6 foot-1 inch senior from Live Oak, Fla. is coming off a career day against VMI. He was the team’s leading scorer with 18 points, secured six rebounds and five steals while shooting 100% from the free-throw line and 44% from three. Wheeler will be looking to apply pressure on VCU guards Nashon Hyland and Adrian Baldwin all night long.

Williams has been impressive coming off the bench for the Rams so far this year. He is currently the team’s second-leading scorer at 13.7 PPG while shooting a much improved 46% from behind the arch. The versatile forward is starting to come into his own this season after being healthy for the longest stint of his career so far. Williams put up 15 points for the Rams against Utah State and Memphis, which were both career highs. He also led the team in scoring with 11 points against a now No.11 ranked West Virginia ball club in the team’s only loss this season. The junior appeared in 21 games last season, despite hand and ankle injuries during the season. He averaged 4.2 points and 2.8 rebounds in 16.3 minutes per game. Williams and fellow junior KeShawn Curry have been VCU’s most improved player so far this season.

Tip-off is set for 5:00 pm est on Wednesday, Dec. 2 in State College, Pa. The game will be broadcasted on Fox Sports 1.