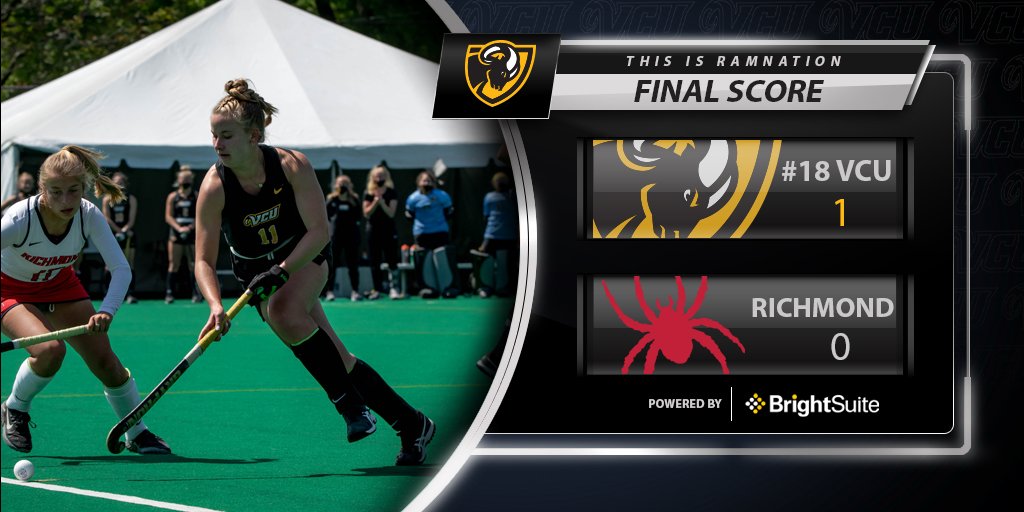 VCU field hockey played against the University of Richmond earlier today in the first semifinal of this year’s A-10 Championships. VCU pulled out a 1-0 win.

The first period was a back and forth affair with the Spiders making the first move. Cori Nichols of Richmond took a shot off a penalty corner at the 5:16 mark which was blocked by Ram’s goalkeeper Sasha Elliott. VCU was later able to get in a corner of their own with Janne Wetzel taking a shot at the goal only to be blocked as well. VCU was able to get two more shots from Lynea Gregory and Bridget McCormick but both missed the goal. The first period ended with the score still 0-0.

The second period was even tighter as both teams stepped up their defenses making an open shot almost impossible. Addie Nash of Richmond was the only player able to take a shot but it missed the goal. The first half ended with both teams locked in at 0-0.

The third period started with VCU’s Litiana Field receiving a green card and forced to sit out a short stretch allowing Richmond to have a one-player advantage. The Spiders were unable to take advantage, as Elliott was able to block a shot by Richmond’s Olivia De Cain. VCU then started to control the game getting in two corners and a shot. Wetzel and Field both took a shot in each corner however, Field’s was blocked by Richmond’s goalkeeper Erika Latta and Wetzel’s went wide of the goal. Emily Van Hijfte was able to get in one more shot with 40 seconds left in the period but was blocked by Latta. Both teams went into the fourth period still tied at 0-0.

VCU came out aggressive, trying to get ahead of the Spiders with Georgia Carr-Brown and Field each taking a shot, with Field’s off a corner. Latta blocked Brown’s shot and Field’s missed the goal. Just when it seemed like the game was going to go to overtime, Wetzel scored a goal off a penalty corner with 2:27 left in the game to put the Rams up 1-0. The goal was assisted by Maite and Svea Sturm. Richmond tried to tie the game back up off a corner as Steffie Bongers took a shot but it was blocked allowing the Rams to hold on to the lead until the end.

Wetzel led the Rams with 3 goals with the Sturm sisters each had an assist. VCU outshot the Spiders 9-4 with 4 being on goal compared to just 2 from Richmond.

The Rams will take on the winner of St. Joseph’s vs Lock Haven tomorrow at noon for the championship. A win tomorrow for VCU would put an exclamation mark to an undefeated season as well as earn their first-ever tournament championship.