VCU Sit Atop The Atlantic-10 After Yesterdays Win 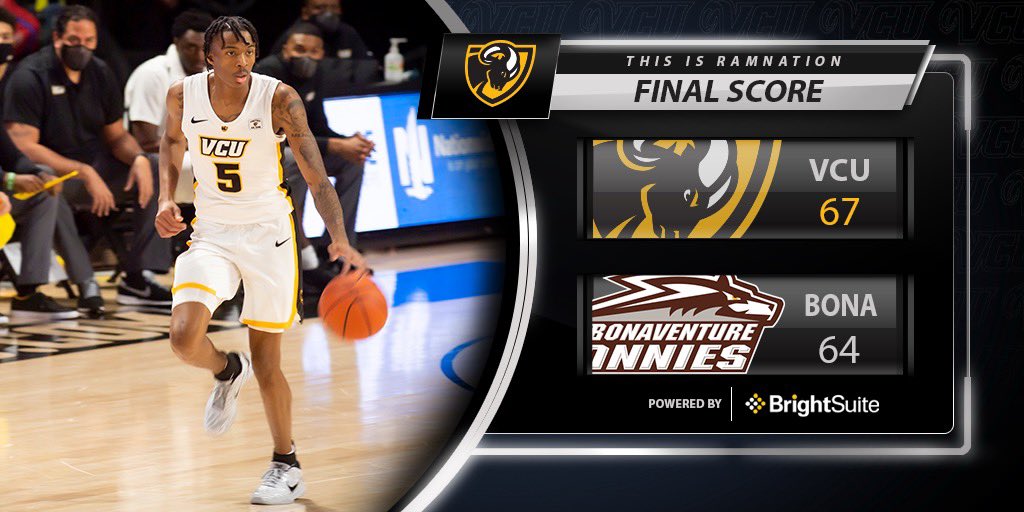 RICHMOND, Va. — VCU defeated St.Bonaventure’s 67-64 at the Stuart C. Siegal Center on Friday, Feb. 12. Yesterday’s win has the Rams on a 5 game winning streak and alone at No. 1 in the Atlantic 10 standings.

Yesterday’s game was a heavyweight fight from start to finish, with each squad throwing punch after punch. At the under-12 media timeout, the Bonnies lead the Rams 9-7 thanks to junior Jalen Adaway who had all of St.Bonaventures points to start the game. The game was all knotted up at 24-24 at the under-4 media timeout, with Adaway still doing the majority of the damage for the visiting team. The Rams would take a 33-26 lead with them into the locker after a 9-2 run to finish the first half. The Rams’ strong end to the first half would continue into the second half, with VCU extending their lead to 11 points at the under-16 media timeout thanks to 15 offensive rebounds and 14-second chance points. VCU’s lead would go to as little as 2 points but an 8-0 run quickly pushed it backed to double figures at the under-4 media timeout. Maybe the biggest moment of the game came at the 3:10 mark when all-conference player Osu Osunniyi fouled out giving VCU the significant size advantage down low. The big man had 11 points, 8 rebounds, and 5 monster blocks for the Bonnies. The black and gold went without a made field in the final 7 minutes of action but their great defense and clutch free throws got them over the line. VCU converted 5-of-6 free throws in the final minute to hold on for the win.

The story of the game was VCU’s effort. The black and gold outrebounded St. Bonaventure 43-34, including a 19-10 advantage on the offensive side of the ball. Williams (9), Hyland (8), Douglas (7), Baldwin (6), and Ward (5) all recorded at least 5 rebounds. The Rams also outscored the Bonnies 18-11 off turnovers and 16-10 on second-chance opportunities. Every VCU player was flying around the court last night, they fought for every rebound and every loose ball. They outworked a veteran Bonnies squad, and it showed in the stat sheet.

The Black and Gold are now 15-4 on the season and 8-2 in conference play. The Rams’ next scheduled contest will be on Wednesday, Feb. 12 when they match up with arch-rivals Richmond in the Richmond Area Honda Dealers Capital City Classic.

You Can Call Me All