After the first day of the Washington Redskins training camp, there were more fans in attendance watching their favorite players practice for the upcoming season. The tone of the weekend was set by having some competition in the defensive backfield of the Redskins. As of July 25th, 2018, there are six safeties, eight cornerbacks and two defensive backs on the roster. In that secondary alone, there are three players from colleges in the state of Virginia.

Greg Stroman, cornerback from Virginia Tech, was drafted in the seventh round of the 2018 NFL Draft by the Redskins. Adonis Alexander, another cornerback from Virginia Tech was picked up in the sixth round of the 2018 NFL Supplemental Draft. Quin Blanding, safety from University of Virginia was signed as a college free agent during this offseason to help bolster the secondary.

According to Blanding, despite of playing for different schools, he is always able to put aside their college team differences with Stroman and Alexander.

“Once we knew that we were all together, that didn’t mean nothing to us no more. We’re a brotherhood and I’ve know those guys before college so it was good reuniting with these guys again and I can’t wait to see what we can do,” Blanding says.

Stroman, who was picked up first by Washington, says that it has been easier to transition to the NFL with having former Virginia Tech teammates like Adonis Alexander and Defensive Lineman, Tim Settle on the team: 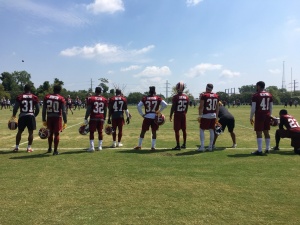 Stroman, number 25 and Blanding, number 41 with a couple of defensive backs for the Washington Redskins

Stroman stated that he has been watching everything that the secondary is doing and listening to the players. He believes that they want to teach the young players, helping them out. Adonis Alexander came a little bit later than Stroman due to being picked up later in the supplemental draft, however he believes that Alexander will transition well along with the competition in the secondary:

Alexander states that the biggest transitions from college to the pros is the playbook and the speed of play. He also mention that the three biggest differences from college is the terminology, that there’s more plays and a plethora of different coverages. Alexander, just like his teammate Stroman, acknowledges that the Redskins backfield is willing to help with their personal development and learning the playbook:

“Got great safeties around me and I ask them for the call. Greg Stroman, my roommate, we’ll go over the playbook at night or whenever we get some free time,” Alexander states.

With the presence of former college teammates Stroman and Settle, he feels that the transition to the NFL has been easier for him because he feels comfortable and right at home. Alexander left Virginia Tech on good terms according to him and he feels that he will always be welcomed by Virginia Tech. What he took away from his college experience is that he can ever let his guard down. That for every mistake that he made, he uses it to build character.

Blanding, also had a similar outlook on his college experience from the University of Virginia and how they prepared him for the next chapter of his life:

“I can go through hard things and I’m built for it. It’s what they instilled in me and that’s what I’m out here to prove and nothing is going to tear me down.” 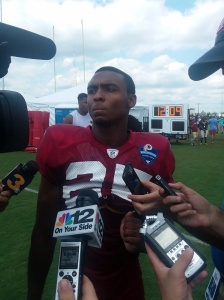 Stroman being interviewed by the media.

Blanding, just like the rest of the newcomers to the team, is always looking to take advantage of every rep he gets:

“Whenever I get the chance to get in, I always got to prove myself. No matter how many reps I got, I’m still taking mental reps on the sideline, I’m staying deep as I can and I see how they play it. I still make my calls, my checks and I’m not lacking at all. I still know what I’m doing at all times and I’m ready to play.”

Just like the secondary, there is competition in every other positon at this point of training camp.

Sprinkle wasn’t the only one to mention how important Jordan Reed was to the team. Wide Receiver, Josh Doctson enjoys the presence of Reed on the team.

“He helps the team out. Jordan has been a significant player. Each day out here, he’s been progressing. I love him as a player. That’s the first person I admired when I got out here.” 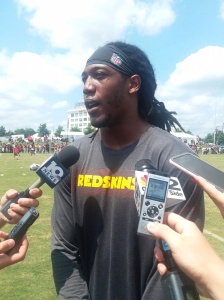 Alexander being interviewed by the media

The Wide Receiver competition is at eleven players as of July 25th and one big name that recently signed onto the Redskins this offseason is Paul Richardson Jr. Doctson acknowledge how well of a student of the game of football that Richardson Jr. is:

“If you watch him, he’s a speedster. He’s a great teammate. He has a huge football IQ. He’s a football player. You don’t have to tell Paul a lot of things. He just goes out here and it’s natural to him.”

Docton showed that he was feeling better from his Achilles injury by making a catch in which he didn’t see the ball until the moment he turned around. Whether it was natural chemistry between him and Quarterback Alex Smith or not, Head Coach Jay Gruden believed that it was luck:

“That was luck (laughter). He never saw that ball. He does have great mitts there is no doubt about it… That particular play, there is no way you can tell me that was skill (laughter),” Gruden stated in his morning press conference.

Gruden would also bring up how valuable it is to have Colt McCoy as a backup for Alex Smith. Gruden believes that he is a great backup quarterback and if anything happened to Smith that he knows that the team is in good hands with McCoy taking charge. McCoy thought about being the starter due to the uncertainty of Kirk Cousins but he states that he appreciate that he has a job in the NFL and that he wants to compete and play.

You Don t Walk Away