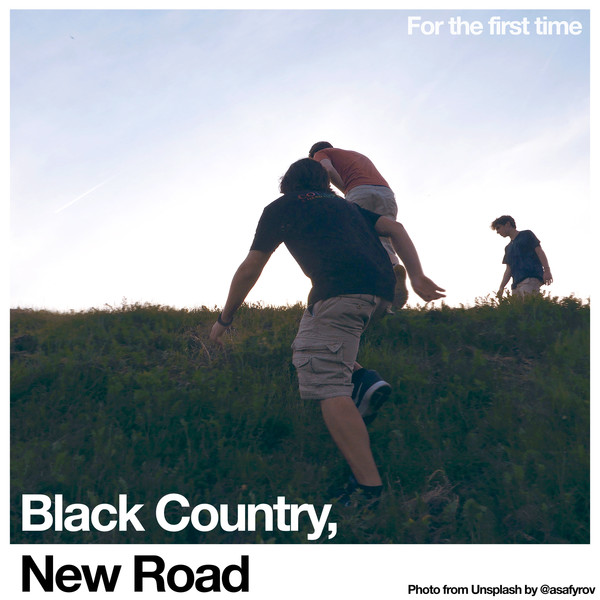 Album: For The First Time

One of the more exciting and anticipated releases of this year, Black Country, New Road’s debut album “For the First Time” blends elements of post-punk, free improvisation, and post-rock together into one unique package. Although many of the tracks on the album have been circulating as singles for the past few years it’s nice to finally see all the final versions of these songs together on one album.

The first track aptly titled “Instrumental” starts off with a simple synthline  and quickly builds into something more extravagant. With the addition of stringed instruments, woodwinds, and a solid drum groove it’s constantly building  and is reminiscent of some popular post-rock bands with it’s feeling of a constant crescendo all leading up to a huge payoff towards the end of the track. “Athens’ France” -Is a more straightforward track leaning more towards the band’s post-punk sensibilities then the track before. The band takes some heavy inspiration from early 90’s band Slint, utilizing the same signature vocal style and angular guitar riffs. Despite the similarities however, the band still manages to keep the album fresh. I enjoyed the subtle use of a string section and a sax towards the end of the track, it really makes it shine. “Science Fair” is one of the album’s noisier tracks with the first minute or so being dedicated to a constant groove and a nearly feedbacking guitar. I really dug the contrast between the quieter and more subdued moments along with some of the all out and crazy moments of the track. The middle of the track sounds like all hell breaking loose with that same feedbacking guitar from the intro coming back along with a noisy overblown saxophone together to form a really cathartic climax for the song. The energy and build up  of this track is immense and I’m a huge fan of the noiser elements of the song. The last minute or so especially shines with it’s gigantic wall of noise and energy ending it off. Sunglasses is one of the standout tracks of the album, with a solid performance from the entire band on this one. This track constantly shifts and changes and sounds as though it could be three separate tracks while keeping the same sense of energy throughout. Like the previous track, it too makes use of the same noisy energy from before only in a more controlled way. Although this track is great by itself it’s a shame that the previous version of the song didn’t make it onto the album, in a way this version feels far less energetic and passionate than the version from 2019. Track X is a great change of pace from the two powerhouse tracks that preceded it. It’s a more laid back track and makes the most of the string section that the band has on the album. “Opus”, the final track and closer of the album is one of the more interesting songs off the album, the main chorus of the track sounds as though it’s taking some inspiration from traditional jewish folk music and it’s inclusion into the track in combination with the rest of the band’s sound makes it an intriguing listen. The energy put forth into this track also makes it a great closer for the album.

Although the band makes no attempts at hiding it’s influences throughout the album, at one point even acknowledging that they sound like Slint I do think that their music is unique and fresh enough not to be seen as entirely derivative and the energy and effort showcased throughout each and every song makes this one of the most exciting albums of 2021 so far.

Take a listen to the album below: https://open.spotify.com/album/2PfgptDcfJTFtoZIS3AukX?si=fVh6wvPWSoSS2vQOe4UEPw

What Are We Standing