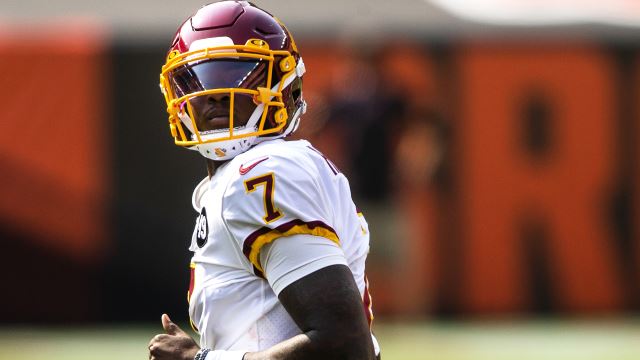 The Washington Football Team looked outright stinky in what was a rather bleak affair on Sunday against the Cleveland Browns. Losing by a score of 34-20, there was a lot that went wrong for the Football Team. They failed to maintain possession of the ball in key moments of the game, sloppy penalties cost us yardage in key situations, and Nick Chubb went to town.

Turnovers were a major problem in this game, Washington’s offense set a new season high of 5 turnovers lost. 4 of which, Dwayne Haskins was responsible for. The entire day, he was staring down his receivers right from the snap of the football. Browns’ CB’s knew where the ball was going before any of the recievers did. Then, when the ball did get there, there was no time to even catch it because the defensive backs had already come down to break up the play. I’m becoming increasingly questioning of Haskins and his ability to improve, because so far this season, he hasn’t shown us much to prove that he can. The turnovers were especially unhelpful, because Cleveland was able capitalize on these errors, totaling 24 points off of turnovers.

With eight minutes and forty seconds left to play, there was still some semblance of hope. Down by 11, Haskins and the Washington Offense march out onto the field facing a third and long. The ball is snapped, Haskins drops back and throws a 14 yard pass to Logan Thomas for the first down, “Okay here we go, this is it” I thought to myself, only to have Haskins give up a sack and a fumble only three plays later. Clinging to the last bit of light that was left, the Browns faced a 4th and 4 with three minutes to go. “Watch the ball!”, the sideline yelled, and I distinctly remember thinking to myself “They’re pros how could they jump offsides here”, LO AND BEHOLD Washington’s longest tenured Linebacker Ryan Kerrigan jumps offsides, sealing a first down and a win for Cleveland. Classic Washington Football.

Nick Chubb was the benefactor of a banged up Washington front, racking up a total of 108 yards on 19 carries and 2 TDs. Unable to set the edge or get much penetration the Washington front four took major hits when both Chase Young (groin) and Matt Ioannidis (arm) both went down with injuries that left them out for the contest. Chase Young assured fans “…nothing major tho… I’ll be back.” in a tweet after the game.

Next week, the Football team will take on Lamar Jackson and the Baltimore Ravens, which will surely be a very enjoyable contest to watch and definitely not an embarassing game to be a Football Team fan…. surely…